A short history of the India Committee of the Netherlands

After 43 years, the India Committee of the Netherlands continued from 1 February 2019 under the name Arisa.

The direct reason for the establishment of the India Committee of the Netherlands (ICN) in 1976 was the Emergency proclaimed by the then Prime Minister Indira Gandhi, in which numerous civil rights were suspended. In the Netherlands there was at the time a positive opinion about this state of emergency, and that the situation was necessary to put the country in order. Some India experts and sympathizers conclude that India had really become an issue. The group aims to provide better information to the Dutch public about the socio-political situation in India. The newly established ICN protested against the restriction of human rights. 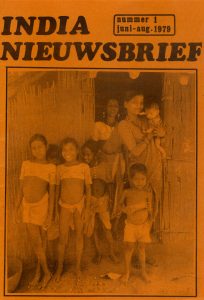 Initially, the ICN was only concerned with writing a documentation folder on India, for Novib. In the summer of 1978 the first trial of the newsletter India Nieuwsbrief was published. A year later, the bimonthly magazine was officially launched.

In 1979, statutes for ICN were drawn up. In 1980 several regional India working groups with a small volunteer secretariat in Utrecht officially set up the association India Committee of the Netherlands, subsidized by the NCO (later: the National Commission for International Cooperation and Sustainable Development, NCDO). Also in 1980, the first paid employee was appointed.

This means a strong impulse for the activities at national level. Raising awareness of the Dutch people and providing information is done by means of the India Nieuwsbrief (after 1990 India Nu), by many successive brochures and during the annual national day for India groups. In addition to providing information, the lobbying activities began, with the first success in 1981 being the action against the supply of shrimp trawlers as development aid. These trawlers, destined for the deep sea, would fish in the over-fished coastal waters and thus destroy the livelihood of traditional fishermen. ICN became nationally known through the success of this fishing campaign. Local and theme groups set up a large number of information activities and actions, including on fertilizer deliveries as development aid, on human rights, on the influence of the pharmaceutical industry, on the Bhopal disaster and on dairy aid (‘Operation Flood’). Partly because of these actions and manifestations, there appears to be a considerable interest for India among the Dutch population. ICN experienced a rapid growth.

In the early nineties, ICN became an active member of the newly established Clean Clothes Campaign, which is dedicated to the rights of mostly female employees in the garment industry. Since the mid-1990s, the focus of ICN campaigns has been mainly on caste discrimination (within the Dalit Network Netherlands and as member of IDSN), child labour (as member of the Stop Child Labour coalition) and corporate social responsibility (especially labour rights). This involved close collaboration with a number of Indian NGOs. This work resulted in recent years in various reports on the (abuses in the) Indian textile industry, where mostly Dalit children (especially girls) have to work in a form of bonded labour, as temporary labourer without any labour rights (such as unionisation). It Also the affect of trade and aid was examined  as well as the changes needed. This has resulted in activities and campaigns aimed at companies and political decision-makers.

The involvement with development aid gradually became less important. ICN focused primarily on political and socio-economic issues that Indian organisations themselves raise, such as child labour. For example in the carpet industry, a sector in which child labour was reduced, but certainly still occured.

Since 2003 – the year in which ICN became a foundation – attention was paid to the cotton and (later) the seed sector. More than half a million mainly Dalit children work for Indian and multinational seed companies. This also resulted in various reports. 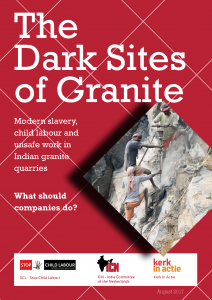 Since 2005, ICN conducted research into conditions in natural stone quarries, involving local groups and companies. This work also resulted in four reports, such as The Dark Sites of Granite in 2017.

Other sectors that ICN investigated were the leather and shoe industry and the production of footballs.

LIW took the initiative since 1997 to draw attention to corporate social responsibility in the Netherlands together with other NGOs. ICN was, together with Amnesty, the author of a political vision on CSR (“Profit of Principles”) and instrumental in setting up a CSR platform and in the development of the “CSR Frame of Reference” that indicates what the international frameworks for CSR should be.

ICN provided suggestions for trade missions and drawed attention for human rights when Dutch ministers are visiting India. Many times questions were posed in the Dutch and European Parliament in response to research and reports from ICN. As a result of these reports, companies have taken measures to prevent child labour and poor working conditions.

Ultimately, ICN has grown into a thorough and solid organisation with a widespread international network. Through these contacts and the extensive knowledge and experience ICN can influence the policy of the Dutch government, EU and companies.