Together with a coalition of businesses, academics, religious organisations, trade unions and civil society, Arisa has launched the Initiative for Sustainable and Responsible Business Conduct (IDVO). This coalition wants to ensure human rights and the environment are respected throughout the supply chain of companies, and advocates binding due diligence legislation in the Netherlands. Companies will then need to take responsibility for the conditions in their entire production chain. Transparency and rewarding front runners are important elements of this new set of rules.

Please visit the website https://www.idvo.org, and join to support the coalition’s message with a logo and a statement. 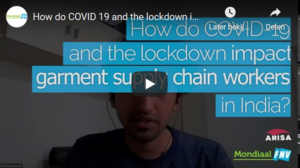 Together with Mondiaal FNV, Arisa organised a webinar for experts on the 30th of June, about the worrisome developments regarding labour legislation in India. Invitees from business, government, politics and civil society and Indian experts discussed the relaxation of labour laws by the Indian government. This relaxation is intended to stimulate the economy and attract more investments during the Covid-19 crisis, but has negative effects on workers and their families.

A compilation of this webinar, with responses from representatives of NGOs, businesses, and trade unions as well as policymakers, has now been published on the Mondiaal FNV website.

In a number of Dutch municipalities – among them Alkmaar, Apeldoorn, Assen, Den Bosch, Deventer, Lansingerland, Midden-Groningen, Nieuwegein and Oosterhout – questions have been asked by municipal councillors about the use of natural stone in their municipality, and whether there is attention for labour conditions in the chain. The reason for this was the publication of the report “Between a rock and a hard place” by Arisa in June of this year. Meanwhile, the municipalities of Eindhoven and The Hague have committed to become members of the TruStone Initiative.

The TruStone Initiative is the first ICSR (International Corporate Social Responsibility) covenant in which municipalities and government procurement agencies also participate. The role of municipalities and their purchasing practices is important as they are large consumers of natural stone. They can ensure companies are stimulated to reduce CSR risks in their chain if requirements are included in the tender procedures, about the origin of natural stone and the working conditions during the extraction.

The municipality of Amsterdam has started a city-wide tender procedure for natural stone. This procedure gives potential suppliers the choice of only a fixed number of “aesthetic groups” of natural stone that are often used in the public space of the city of Amsterdam. In this procedure, particular attention is paid to the International Social Conditions and the TruStone Covenant. 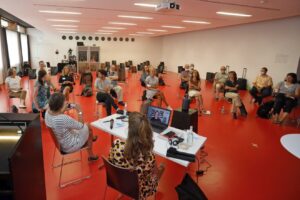 On the 15th and 16th of September, Arisa staff members Gine Zwart and Lizette Vosman attended a conference in Stuttgart for contracting authorities and procurement agencies as well as natural stone and gravestone traders and certification bodies in Germany. They led a workshop on the TruStone Initiative, together with Frank van Sloun from the municipality of Amsterdam. 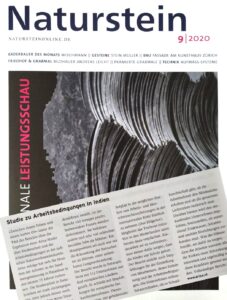 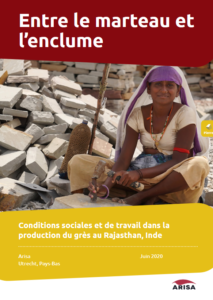 In Germany, the magazine Naturstein of the platform for natural stone in Germany also paid attention to the report “Between a rock and a hard place”.

To be able to start a dialogue with French natural stone companies, Arisa recently published a French translation of the report. 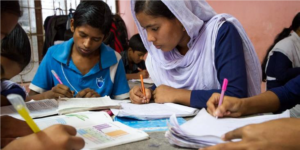 Together with four garment companies and partners in India, Arisa has spent the past three years working on the Remedies Towards a Better Workplace project, to prevent and eliminate child labour in the garment supply chains. The project focused on parts of the chain on which companies affiliated to the Dutch Agreement on Sustainable Garments and Textile can directly exert influence.

The project resulted, among others, in the development of tools for tackling child labour and training in factories as well as improved dialogues between employers, suppliers, companies and NGOs working in the area.

The main results of the project and experiences of project partners and local participating factories can be found here. 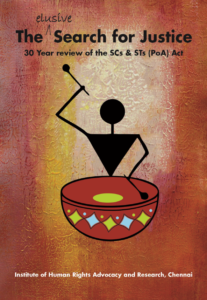 The Constitution of India abolished untouchability in 1950. In 1955 the Untouchability (Offences) Act followed which, after some amendments in 1989, resulted in the Scheduled Castes and Scheduled Tribes (Prevention of Atrocities) Act.

On September 11, the Indian Institute of Human Rights Advocacy and Research published the voluminous report “The elusive search for justice – 30 Year review of the SCs & STs (PoA) Act”. The report presents the experiences of those trying to deal with discrimination based on descent, from local to global levels, from the stigmatised communities to the international solidarity community. Progress over the past 30 years has been mixed, there are still major problems. For example, marriages between different castes are actually still prohibited. More than 90% of the cases filed under the law lead to acquittal, thus significantly raising the threshold for filing a case. Caste discrimination in the workplace is still the order of the day. The report offers a candid view of the multiple challenges Dalit and Adivasi human rights defenders face – especially if they are from the communities themselves, with the hope to draw lessons for the future.

Arisa director Sandra Claassen wrote a contribution on the position and exploitation of Dalits in international corporate supply chains and participated in the webinar in which the publication was presented. Former director of Arisa Gerard Oonk also wrote a contribution about his experiences.

The report, as well as a second part with data on the implementation of the SC/ST Prevention of Atrocities Act, can be downloaded here.

The report “Sowing Hope” released in June showed that in the cotton and vegetable seed production in India, child labour has decreased by up to a third in the last 5 years, especially in areas where significant interventions have taken place. Unfortunately, the gap between paid wages and minimum wages has widened.

The International Dalit Solidarity Network (IDSN) highlighted in an article in response to the report (June 16, 2020) the large number – more than 50% – of Dalits and Adivasi among children working in the seed industry.

Branch association Plantum also responded to the report on its website (11 June 2020) [in Dutch]. 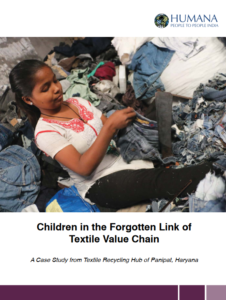 In partnership with Arisa and Sympany, Humana People to People India (HPPI) in Panipat launched the Children in the Forgotten Link of the Textile Value Chain project on January 1st, 2018.

Panipat district in the Indian state of Haryana is the textile recycling hub of the world. Second-hand clothes from across the world are brought to the recycling units of Panipat to be converted into blankets, mats and other reusable items. HPPI started the project to tackle the problem of child labour in these factories.
HPPI has summarised the project’s progress and challenges in creating a child labour free zone in the three wards of Panipat in a brochure. This document provides a consolidated perspective of the urgent need of quality education and community engagement in making the objectives of such an endeavour a success. The brochure can be downloaded here.

As part of the same project, Arisa and Sympany published the report “Textile Recycling Unravelled” , which shows that the textile recycling chain in Panipat is complex and involves risks of child labour and poor working conditions.

Garment workers are left without billions of their wages during pandemic 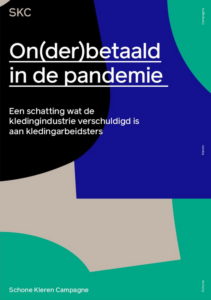 Workers in garment producing countries have lost between EUR 2.7 and 4.9 billion in salaries in recent months as a result of layoffs and job cuts. Millions of employees at garment factories around the world have not received their normal wages or been paid at all for months, according to a new report from the Clean Clothes Campaign (CCC) in collaboration with the US Worker Rights Consortium.
Since the start of the corona crisis, the garment industry has been in deep recession, first because raw materials and textiles from China were not available and since March as demand for garments in Europe, the US and Japan stumbled as a result of the lockdowns.

The report, entitled “Un(der)paid in the pandemic”, makes a detailed estimate for a number of Asian production countries of non-payment of wages in the months of March, April and May as a result of cancellations of orders by garment brands, imposed unpaid leave and state-sanctioned pay cuts. Based on information from local trade unions and labour organisations and an analysis of public sources, CCC estimates that garment workers in South and Southeast Asia received more than 38% less wages than their regular income. In some regions in India, this number rises above 50%.
Read more about this in an article on the CCC website. You can also download the report here.

The Delhi Society for Labour & Development published the report “Garment Workers in India’s Lockdown: Semi-starvation and De-humanization Lead to Exodus” in June this year. The report states that garment exporters in India, abandoned by fashion brands and without support from central and state governments, in turn abandoned their workers. Workers – particularly in the National Capital Region and Tamil Nadu – reported conditions of hunger, dehumanization, forced labour and travel bans. You can download this report here.

As the problems for the (migrant) workers are still far from solved, our campaign to raise money for our Indian partners continues and it is still possible to make a donation to account number NL81 TRIO 0379 313 200 (BIC code: TRIONL2U) in the name of Arisa Foundation, stating “Donation partners Arisa”. For more information, visit https://arisa.nl/oproep-200331/?lang=en.
On behalf of our partners, we would like to thank everyone – individuals and companies – who already made a contribution!

Arisa is active on social media. Under the name ‘Arisa Foundation’ we share messages about human rights violations in South Asia, especially in relation to the global supply chains of garment and textile, natural stone and seed production. Follow us on Twitter and LinkedIn.

With this newsletter, Arisa wants to keep you specifically informed about our own activities. 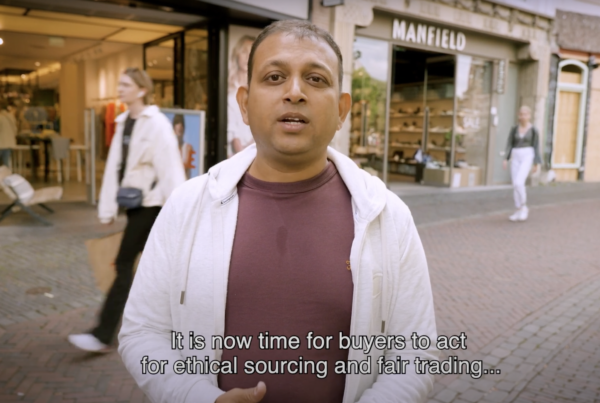 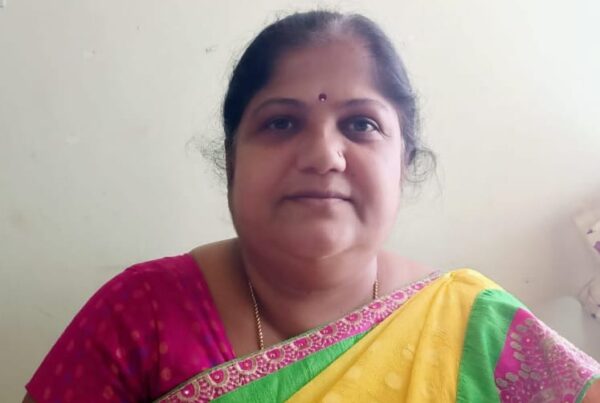