Multinational and Indian seed companies are paying Indian farmers who are producing their cotton seed almost 40% too little to enable them to hire adults for the local minimum wage of Rs.52 (€1,-) instead of children. The companies are multinationals like Bayer, Monsanto and Syngenta but also Indian companies like Nuziveedu Seeds, Raasi Seeds and Ankur Seeds.
At present the farmers working for these companies mainly hire children and young people below 18. At least 100.000 of them work 13 hours a day in cotton seed production in Andhra Pradesh for less than half a euro per day. They are often bonded by loans given to their parents.

Two new reports
These are some findings from the report The Price of Childhood released by the India Committee of the Netherlands (ICN), the International Labor Rights Fund (USA) and Eine Welt Netz NRW (OneWorld Net Germany). The authors of the report, independent Indian researcher Dr. Davuluri Venkateswarlu and British agricultural economist Lucia da Corta from Oxford University, are holding the view that the seed companies are responsible for large-scale child (bonded) labour and for evading India’s minimum wage laws. The parents of the working children are often un(der)employed. If they do have work in the sector, it is usually for a wage which is not much more than half of the official minimum wage.

According to a recent report of the MV Foundation, Elimination of child labour in cotton seed farms through social mobilisation, 11 children in Andhra Pradesh have died and 3 were severely injured due to accidents caused while travelling to work and due to inhalation of pesticides working in the fields. Many children have health problems like headaches, vomiting and depression. Often they don’t have access to medical aid.

Who is paying the price of childhood?
The research clearly shows that farmers would have a net loss if they would hire adults at the local minimum wage instead of children and teenagers. That is by far not the case for the companies. The market prices of one kilogram of cotton seed is 3.6 up to 12.1 times as high as the procurement price paid to the farmer! If companies would pay for the substitution of child labour for adult labour (against minimum wages) it would cost them between 4.2% and 21.3% of their profit. If paid by the consumers the seed would cost 3.2% to 10.9% more.

Companies like Bayer, Monsanto and Syngenta do acknowledge that there is substantial child labour in their supply chain and that they are at least partly responsible for that. They do however deny that there is a relation with the price they are paying to cotton seed farmers. According to the companies farmers are to blame for the high incidence of child labour and say farmers have to improve their productivity to make the shift from child to adult labour.

A consequence of this is that the activities against child labour undertaken by the companies had a limited effect thus far. The report ‘The Price of Childhood’ shows that there has been a decrease in the number of working children between 6 and 14 years to roughly half of all labourers. However, the other half now consists for 70% of young people between 15 and 18 years of age. They have generally worked as a child before and are now kept on. But like the younger children they work around 13 hours a day and hardly earn more than they do.

Flawed inspection
Multinational companies as well as Indian companies have been criticised since 2001 by the MV Foundation – a very successful NGO spearheading the anti-child labour movement in the state of Andhra Pradesh – for allowing and abetting child labour in cotton seed production. This has been supported by northern NGO’s like the India Committee of the Netherlands (ICN), the International Labor Rights Fund (USA) and a number of German organizations by putting pressure on multinational companies to eliminate child labour in their supply chain.

While in earlier years not much was done by the companies except giving statements against child labour, this year a policy was agreed upon by Bayer and Monsanto – supported by Syngenta which has a ‘crop holiday’ in Andhra Pradesh in 2005 – consisting of monitoring, incentives and sanctions. Monitoring started in co-operation with the MV Foundation. The companies promised a bonus of 5% to farmers working without child labour. Violations however would, after a first warning, be sanctioned by a reduction of 10% and finally a rejection to purchase the seeds. Indian companies like Ankur, Nuziveedu and Raasi did not take any action thus far, despite promises by the Association of Seed Industry (ASI) of which they are members.

After a few months of joint inspections with multinationals, the MV Foundation however decided in September to discontinue this kind of co-operation. It found that e.g. visits were announced by the companies to the farmers. The result was that they only found a few children, while unannounced visits by the MV Foundation revealed there were many more children working in the fields.
The MV Foundation offered to continue a form of independent monitoring and provide the results to the companies and/or the local authorities and the public. 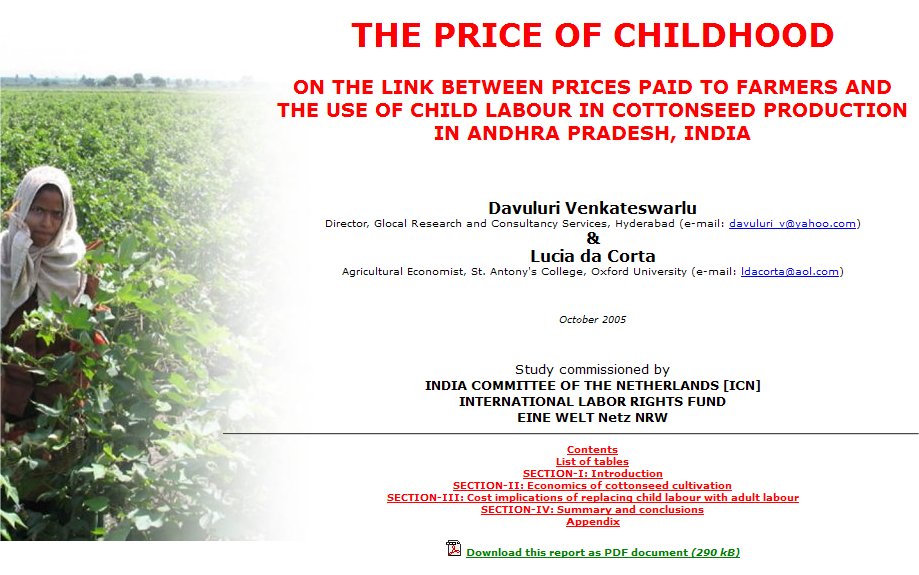