More than half a million child labourers in Indian seed production – Situation improved where government, NGOs and companies intervened

More than half a million children in India below 18 years are growing cottonseed and vegetable seeds under hazardous conditions, including very long working hours and exposure to pesticides. Around 230.000 of them are below 14 years of age. They produce the seed on the land of small and marginal farmers, which multinational and Indian seed companies use to outsource their hybrid seed production.

Child labour below age 14 in cottonseed production, although still a huge problem, has decreased in India by 25%. The decline is greater in areas where the MV Foundation (an NGO) and companies like Bayer and Monsanto have made efforts to eliminate it.

These are some key outcomes of two new field-based research studies that where published today by the India Committee of the Netherlands, the International Labour Rights Forum and the campaign ‘Stop Chid Labour – School is the best place to work’. Both studies by Dr. Davuluri Venkateswarlu covered more than 90% of total Indian cotton and vegetable production in the states of: Gujarat, Andhra Pradesh, Karnataka and Tamil Nadu for cottonseed and Gujarat, Karnataka en Maharashtra for tomato, pepper, okra and brinjal (egg-plant) seeds.

The proportion of child labour to the total work force on farms producing cottonseed for Bayer and Monsanto has dropped from nearly 53% in 2003-4 to less than 3% in 2009-10. Agricultural wages is those areas have gone up. But generally official minimum wages are not paid, especially to women who generally earn 50 to 60% less then men. Children earn even less.
Multinationals like Dupont, Dow AgroSciences, Bejo Sheetal, Advanta en US Agri as well as Indian companies have not made any changes to eliminate child labour. The report shows that some seed companies are relocating and expanding their cottonseed production to remote areas and small family-based farms where cheap labour is more easily available.

The report also deals with gender and caste discrimination of the workers. Around 75% of the work is done by women, especially girls. Women not only are paid much less for the same work, they often work longer hours for it. Dalits, the so-called ‘untouchables’ and Adivasi (tribals) constitute in most states the majority of the workers. Dalits are frequently being ill-treated and expected to do additional work like cleaning the cattle shed and carrying loads.

ICN, ILRF and Stop Child Labour are appealing to the companies involved, the Indian government, the International Labour Organization and others to address the issue of child labour and serious violations of this large group of workers with utmost urgency. 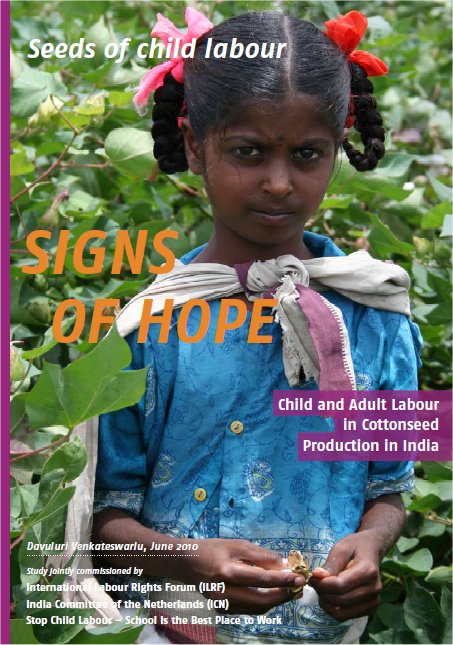 Download PDF report “Growing Up in the Danger Fields: Child and Adult Labour in Vegetable Seed Production in India” 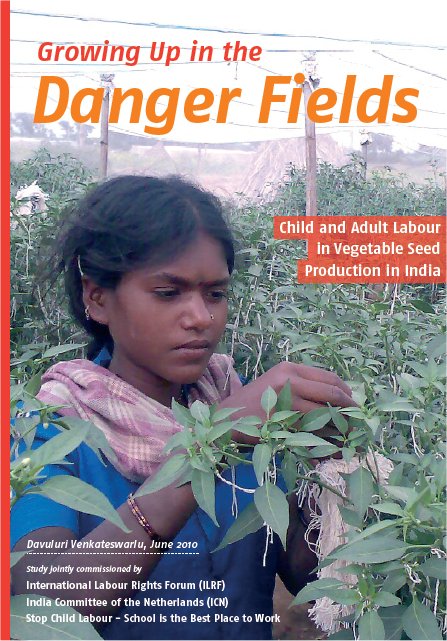