Workers picking tea for Unilever in India and Kenya are subject to precarious working conditions and labor rights violations, even though this tea carries the Rainforest Alliance certificate. This is an important finding from the report Certified Unilever Tea – Small cup, big difference? that SOMO and the India Committee of the Netherlands (ICN) are releasing today.

Tea pickers on Unilever’s own plantation in Kenya suffer from corruption and sexual harassment by blackmailing supervisors, as well as from poor housing and discrimination. Also, many workers complained that the company systematically deprives them of a permanent contract with better benefits through the practice of firing employees for a minimum period of one month and then rehiring them.

For workers at Unilever tea suppliers in India the situation is no better. Despite the RA label, there are problems regarding payment of the minimum wage, discrimination, substandard plantation facilities (e.g. housing and sanitation) and the unprotected application of pesticides. As in Kenya, many plantation workers at these Indian tea suppliers are denied a permanent contract while working most of the year and for years on end. The trade union situation is also problematic. The work of more progressive trade unions is frustrated in numerous ways, which undermines the workers interests.

Civil society organisations have been urging tea companies for many years to address the precarious working conditions of millions of tea workers worldwide. In response, there is a clear trend of multinational tea packers indeed stepping up their efforts to address sustainability issues in this sector. To this end tea companies are increasingly making use of independent and more rigorous multi-stakeholder sustainability standard systems, such as Rainforest Alliance (RA), Utz Certified and Fairtrade, which are generally seen as best industry practice. As a consequence the share of world tea exports certified by global standard systems grew by 2000% in the period from 2004 to 2009 alone. It is estimated that roughly 15% of tea exported worldwide will have been certified in 2011. Now several years later this study is assessing whether there is evidence of improvement of the working conditions on tea estates that have achieved RA certification, the most important sustainability certification in the tea sector in terms of volume.

SOMO researcher Sanne van der Wal: ‘The findings from our study give rise to doubts regarding the reliability of Rainforest Alliance certification. However, it is not the primary intention of this research to question the reliability of sustainability certification, nor to obstruct the increased adoption thereof. Yet we do think that creating more clarity about the effectiveness of such labels is in everyone’s interest. With this research we wanted to make a start with this.’ SOMO and ICN call for more research into the effects of labels in practice. In addition, they recommend Rainforest Alliance and the companies that work with this label to conduct better investigations and address the issues flagged in the research. 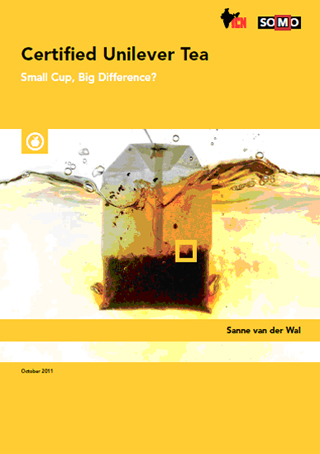