Women growing seeds for companies in India discriminated and underpaid

Other key messages of the new report:
* Agricultural wages have increased but they are still below minimum wages
* Multinationals not better than Indian companies regarding wages
* Dalits often make longer working days
* Child labour depresses the wages

Today the Fair Labor Association (FLA) and the India Committee of the Netherlands (ICN) are publishing the report “Wages of Inequality – Wage Discrimination and Underpayment in Hybrid Seed Production in India”.
The report is based on field research by Dr. Davuluri Venkateswarlu and Mr. Jacob Kalle into the wages of labourers – women, men and children – who are growing cotton and vegetable seed in four Indian states. They are working for farmers that supply their seeds to Indian as well as multinational companies. The latter are – among others – Monsanto, Syngenta, Dupont, US Agri, East-West Seeds, Bayer, Advanta and Bejo Sheetal. Agricultural wages have increased but they are still below minimum wages
Wages for agricultural labourers in India have increased quite substantially far outstripping inflation. During 2008-2010 agricultural wages have gone up 106.5% in Andhra Pradesh, 66% in Karnataka, 63% in Maharashtra and 24% in Gujarat. This is caused by the National Rural Employment Guarantee Act (NREGA), guaranteeing 100 days of work per family, increased demand for labour outside agriculture, inflation and increase in procurement and minimum support price of commodities.
Despite this welcome increase, the income of agricultural labourers is still meagre. Only men now often earn the official minimum wage or a bit more. But not women. The minimum wage differs per state and sometimes per region and activity and varies between Rs. 100 and Rs. 250 (Indian rupees) for an 8 hour day.

Women discriminated and underpaid
The report shows that women are still earning substantially less than the official minimum wage because they are paid considerably less than men, also for exactly the same tasks. The average daily wage of women for jobs like sowing, weeding and harvesting is 5-48% lower than the official minimum wages in different states. The wage varies between Rs. 85 and Rs. 150 per normal working day. Men mostly perform the better paying jobs like spraying pesticides, ploughing and application of fertilizers.

Dalits often make longer working days
Most workers at seed farms are either Dalits, other low castes (‘Backward Castes’) or Adivasi (tribals). There are no differences in wages between these groups and between them and workers from higher castes. But ‘differential treatment’ was found in Koppal district in Karnataka, including scolding of Dalits. In addition so-called Annual Farm Workers in Maharashtra are almost all Dalits. They are ‘always at the disposal of the employer and do not have fixed working hours’. They normally work 12 hours in a day and are not paid for their ‘overtime’.

Child labour depresses the wages
Of the 486 labourers interviewed as part of the research almost 10% were children under 14 years of age, while 92 workers (almost 20%) are younger than 18. Children are mainly working on manual cross-pollination of the seed plants, a labour-intensive part of production in which also many women are involved. If the children are experienced they earn the same wage as women, but if they are not experienced yet they earn 10 to 20% less.

Child labour is still a serious issue in hybrid seed production. About the large number of children working in cotton and vegetable seed production – in 2010 still more than half a million – ICN has published a number of reports during the last ten years.

Previous research has shown that wages rates are substantially higher in the areas where there is a low incidence of child labour. This is e.g. visible in some of the areas visited for the present study: compared to other locations the wage rates are higher in Nandyala location in Andhra Pradesh and Ranibennur in Karnataka. The low incidence of child labour is an important reason why workers are able to get better wages in these locations.As far as combating child labour in the supply chain is concerned there are significant differences between companies as was shown in the reports “Seeds of Child Labour – Signs of Hope” and “Growing up in the Danger Fields”, published in 2010. 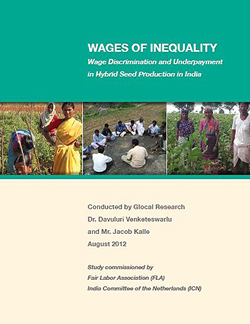