ICN report leads to action by companies and trade association

The Dutch government wants child labour and low wages in the seed production in India “to be eliminated as soon as possible”. That is what Dutch Minister Ploumen of Trade and Development Co-operation answered in response to parliamentary questions from Members of Parliament ChristianUnion, Party for the Animals, Socialist Party and 50Plus. She made an agreement on that with the Dutch seed companies Bejo Seeds and Nunhems, as well as with trade association Plantum. The India Committee of the Netherlands and the Stop Child Labour campaign welcome this agreement.
Minister Ploumen will visit India beginning of September. CSR will be an important part of her mission. 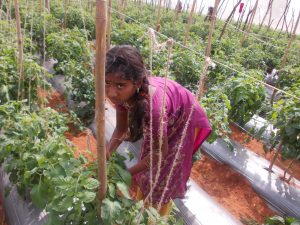 Measures against child labour and low wages of women
Minister Ploumen writes in her reaction that the report A Tale of Two Companies of the India Committee of the Netherlands (ICN) has led Bejo Finance BV – that has a minority share in the Indian company Bejo Sheetal – to take action against child labour now. These measures include “informing producers, monitoring in cooperation with NGOs and local authorities, financial incentives for producers who adhere to the agreements and supporting/funding initiatives to educate children who come from a working situation”. These measures – says Ploumen – are inspired by the results of Nunhems. Bejo Zaden did tell the Dutch newspaper Trouw earlier that all orders for the Dutch market will be suspended “till the Indian Bejo Sheetal has its business affairs in order”.

Minister Ploumen says that Nunhems and Bejo informed her that the farmers who work for their partner companies will have to pay the minimum wage to their employees. Nunhems is doing a pilot project on this. A Tale of Two Companies did report that women and girls – over 80% of the employees – often earn less than the minimum wage of €2 per day.

Public reporting
Trade association Plantum has promised to Minister Ploumen to request its members to evaluate their policy for the eradication of child labour and report the results to Plantum. On that basis the trade association will then compile and will then compile an aggregated public report on the matter. Furthermore Plantum did promise that her working group on child labour will be broadened to labour conditions, thereby “putting minimum wage as an issue on the agenda too”.
End of 2014 the Ministry of Ploumen will have a follow-up meeting with Bejo Seeds, Nunhems and Plantum on the results of the actions promised by them.

Trade mission to India
The Members of Parliament also wanted to know if the Minister had the intention to raise the issue of child labour and low wages in the Indian seed sector with her Indian counterparts during her trade mission to India beginning of September, also in view of working on joint solutions. Minister Ploumen responded that Corporate Social Responsibility (CSR) would be an important part of her mission and that this would relate to the two thematic areas of this mission: urbanization and food security. However, she did not directly respond to the question if child labour and wages issues in the seed sector will be raised in India.

ICN: Living wages needed
Gerard Oonk, director of the India Committee of the Netherlands: “It’s very good that Minister Ploumen comes to agreements with seed companies and their trade association on their implementation of labour rights. That should also include a ‘living wage’ and not just a minimum wage. Such agreements – as far as we are concerned in written form – are also very welcome with other trade associations whose members are active in countries where there is a high risk that companies violate human rights”.