New Report: Many seed companies involved in child labour and below minimum wages of women in vegetable seed production in India

Almost 156,000 Indian children are producing vegetable seeds (tomato, hot pepper, okra), of which 50,000 are below 14 years of age. The large majority of them are either Dalits, low caste or Adivasi (tribals). All of them are exposed to harsh working conditions, including poisonous pesticides and long working days. They mostly drop out of school between 11 and 13 years of age. The number of adolescent children (14 to 18) increased with more than 37,000.
Multinationals like Limagrain (French), Sakata (Japanese), Advanta (Indian) and East-West Seed (Dutch) had between 10 and 16% children below 14 years working at farmers producing seeds for them. Indian companies show similar figures. All companies have around 30% adolescents working on supplier farms.

These are key findings from the new study Soiled Seeds – Child Labour and Underpayment of Women in Vegetable Seed Production in India by Dr. Davuluri Venkateswarlu, long-term expert on the issue. He studied the situation in the states of Maharashtra and Karnataka, which account for 80% of the vegetable seed production.

Another key finding from the report is that women are mostly not paid the official minimum wage for their work. They are generally assigned tasks – like cross-pollination, weeding and harvesting – that pay less than activities performed by men including spraying pesticides and applying fertilizer. Depending on the specific region women earn between 11 and 47% less than the official minimum wage. Multinationals are not performing better on wages at their suppliers than Indian companies. Activities by e.g. Nunhems/Bayer and Syngenta raising awareness on the issue and promoting record keeping with farmers have not led to payment of at least minimum wages.

The vicious cycle of prices, underpayment of women and child labour
Soiled Seeds again confirms previous studies that low procurement paid by companies to farmers have a strong impact on both child labour and the underpayment of women. Wages are higher in locations where procurement prices are higher. A sample of farmers shows again that with present prices farmers do not make any profit if they would pay minimum wages to all labourers. This also implies that farmers have a strong incentive to hire (cheaper) children instead of adults. Higher procurement prices are therefore a pre-condition to pay at least minimum wages and fully eradicate child labour from seed farms. Of course also other interventions are required to solve both issues.

Hopeful developments
Soiled Seeds shows a small decline in the average number of young children employed per acre in vegetable seed production in India. In parts of the states Karnataka and Maharashtra, where there have been effective interventions by e.g. companies, local government and/or NGOs, there is a significant decline.
A positive development is also that more companies have now started to take action on the issue of child labour. The initiatives undertaken by Syngenta, Bayer, Monsanto, Advanta and Namdhari had – in varying degrees – a positive impact in reducing child labour at the seed farms. Recently – partly after the draft report was sent to companies – East-West Seed, Kalash Seeds, Nuziveedu, Limagrain, Sakata and Mahyco, also started interventions but given the short time-frame with still limited or unclear impact. East-West Seed has issued a written response to the report, showing encouraging first signs of improvement.

Also on the issue of minimum wages new, and potentially promising, initiatives have been undertaken. Syngenta has e.g. taken the initiative to work towards at least payment of minimum wages to all workers after a recent report. Also ten seed companies – both multinational and Indian – as well as three NGOs and the researcher of Soiled Seeds participated on 28th August 2015 in a multi-stakeholder consultation on implementation of minimum wages and the eradication of child labour and reported on it. 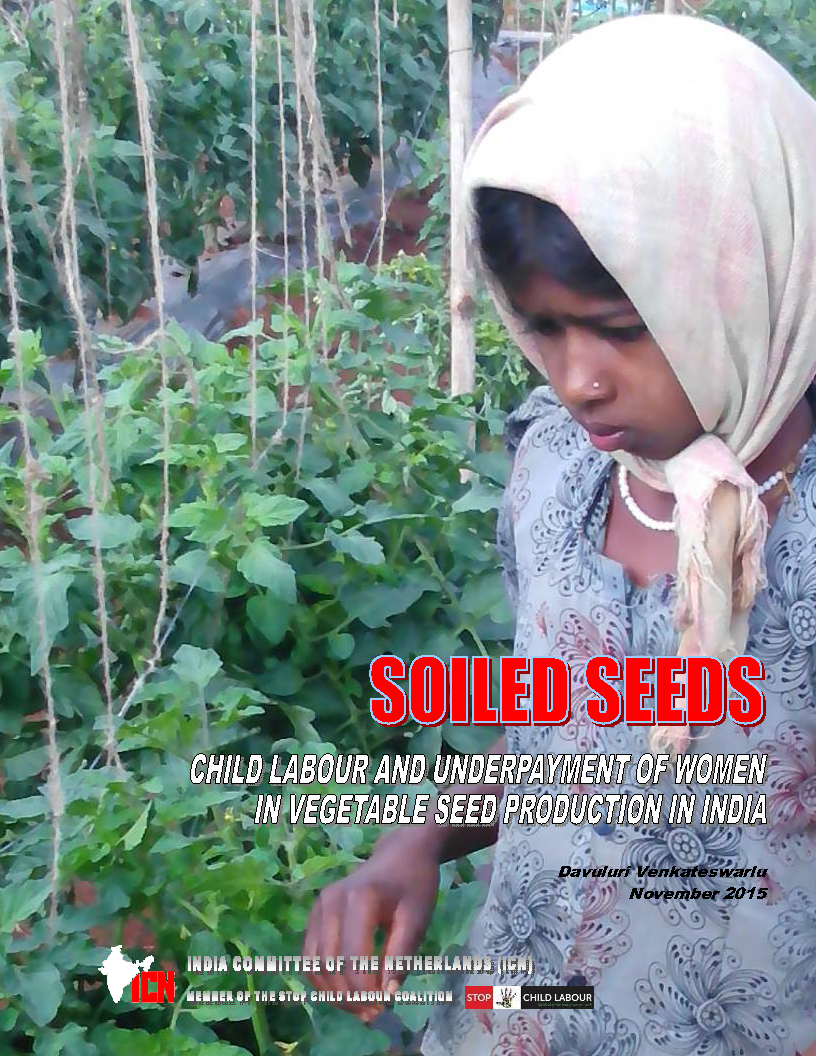