The paper Unfree and Unfair – published today by the India Committee of the Netherlands (ICN) – gives evidence of appalling living conditions and restricted freedom of movement of young migrant garment workers in the Indian city of Bangalore. An increasing number of young migrant women workers are staying in factory-owned hostels with poor living conditions while their movement is severely restricted. The wages of the workers do not add up to a decent living wage.
The hostels are run by garment factories in Bangalore that produce for leading multinational brands like C&A, H&M, Tommy Hilfiger, Inditex and GAP. These companies promised a number of specific actions to provide migrant garment workers with better living conditions in Bangalore.

Unfree and Unfair explains the conditions for migrant workers in four garment factories – K Mohan, Texport Industries, Arvind and Shahi Exports – located in Bangalore, the major hub for the garment industry in South India. Arvind Ltd. Exports produces garments for H&M and Shahi Exports is a long term supplier for C&A. The research is based on a mix of desk research and interviews with 110 workers, additional discussions with workers from other factories and interviews with members of the Garment Labour Union (GLU) in Bangalore.

‘Nothing is good’
“Nothing is good. But we are staying here because we have to live and there is no other way,” explains a worker at Arvind about the conditions at the factory-owned hostels for migrant workers. Women workers are only allowed to leave the hostel once a week, which is usually for two hours on Sundays. They can only leave the hostel after registering with the security guard, who some think has to “… ensure that we do not leave for our villages after taking our salary.” Workers also complain that they are not allowed to take leave.

The workers are generally unhappy with the available facilities and the lack of provisions for recreation. All hostels run by the garment factories lack basic amenities, such as proper furniture, cupboards, beds and mattresses. In most cases, money is deducted from the workers’ salary for accommodation, electricity and water. As reported by workers staying at the Arvind-run hostel, there is no kitchen facility, the hostel is not clean and the water supply is irregular. The migrant workers do not speak or understand the local language, which makes them more vulnerable for exploitation. For example, K Mohan factory had separate hostels for migrant workers from North India, who paid around € 27 for food and accommodation, while local workers paid around € 19 per month for the same in their own hostels.

On average the garment workers receive between € 95 and € 115 per month, which is just above the official minimum wage in the range between € 93 to € 103 with effect from April 1st 2015. However, these wages do not add up to a decent living wage.

‘Scolded regularly’
Some workers say that they are scolded regularly by their supervisors, but most workers are afraid to talk about any abuse they might be facing. The local labour unions cannot access the migrant workers, because of the security guards at the hostels and the restricted freedom of movement. Thus, while the language barrier prevents outside communication, migrant women workers have no place to go for effective grievance redressal.

Responses from the brands

All the aforementioned multinational brands sourcing from the garment factories in Bangalore have responded to the findings and declared to take serious action.C&A, H&M and Inditex announced to work together toward a coordinated and collaborative approach to improve the living conditions of the migrant garment workers. Jointly, they want to ensure freedom of association, by liaising with local trade unions GLU (Garment Labour Union) and GATWU (Garment and Textile Workers Union). They also want to empower migrant workers with training and a grievance handling system, with support of the local NGO Gram Tarang. They have said to review curfew regulations at hostels and to engage with industry experts, other brands and stakeholders to implement a comprehensive industry-wide program to institutionalize international standards in the area of recruitment, accommodation, grievance handling, training and development of migrant workers.

Individually, C&A will take efforts to further investigate conditions at Shahi Exports, H&M will apply and reinforce compliance with multi-stakeholder developed dormitory guidelines for all hostels in the H&M supply chain, and Inditex will implement a project throughout their supply chain in India, based on a baseline assessment, targeting the provision of better hostel facilities, putting in place a grievance handling mechanism and training and counselling sessions for migrant workers and sensitizing (management) staff.

PVH shortly explained that they asked the named suppliers to report back to them on their individual circumstances and that they were developing guidelines that are intended to address the issues raised in the ICN paper Unfree and Unfair.

Due to miscommunication, the response of GAP was received after publication of the Unfree and Unfair paper. GAP extensively replied and stated that apart from efforts with individual vendors, they also closely work with ETI and other brands to contribute to an industry-wide multi-stakeholder forum comprising of industry, brands, local unions and other civil society organisations to effectively address the issue in Bengaluru and to find long-term sustainable solutions.

After a year or earlier we expect to hear from companies how the planned measures have been implemented and what the results are. 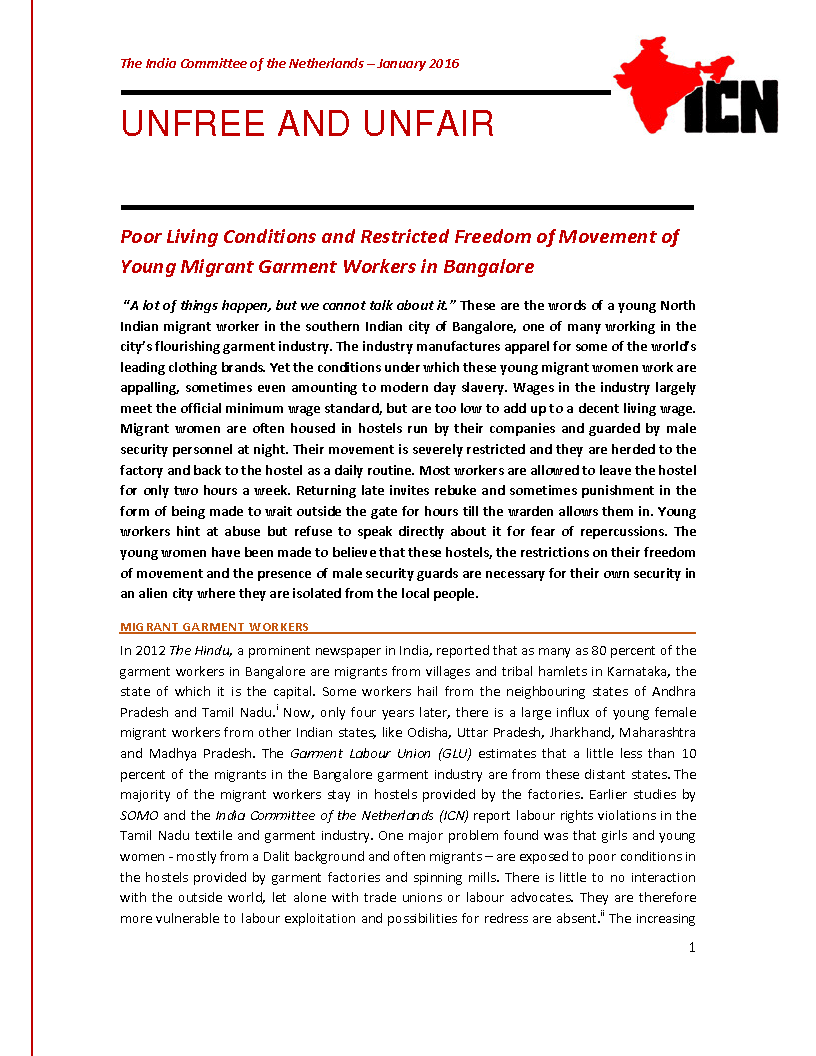