The report Certified Unilever Tea – A Cup Half Empty, published today by the India Committee of the Netherlands (ICN), provides evidence that working conditions at two Rainforest Alliance (RA) certified Indian tea estates providing tea to Unilever have improved but continue to be not ‘up to standard’, in particular for casual workers. Wages – between €3 and just over €4 – are far less than a living wage of around €7.50. Casualization of the workforce substantially increased, most of them migrants or retired permanent workers. They do not receive the same social benefits as permanent workers.

Even though RA and Unilever put into place measures to improve labour conditions at these tea estates in response to non-compliances found in 2010, there are still many issues found that are not in line with the standards used by RA* and that require immediate attention. Since 2010 conditions for workers on both Havukal and Kairbetta estates have somewhat improved. However serious problems were found related to unequal benefits for casual workers, inadequate compensation for overtime working hours, insufficient precautions in chemical handling (e.g. non-mandatory use of personal protective equipment) and lack of freedom of association and worker representation.

Follow-up study: improvements after 2010/11?
The study is a follow-up to the SOMO-ICN 2011 report titled Certified Unilever Tea – Small Cup, Big Difference?, which focused on working conditions on eight large RA certified tea estates assessing the effectiveness of RA standards in the field. In the SOMO-ICN 2011 report, several issues of systemic non-compliance with the RA standards were found at the eight examined tea estates. These were mainly related to casualization and unequal benefits for casual and permanent workers, lack of freedom of association, and the dangerous exposure to pesticides.
This current study therefore focused specifically on these identified issues in two of the eight tea estates that were covered in the previous study – Havukal and Kairbetta tea estates in India – to assess whether working conditions have improved.

It is concluded in the report that, in the recent years, scarcity of labour and better employment opportunities for native tea estate workers has brought some positive changes in the working conditions of the workers at Havukal and Kairbetta tea estates. Improvements have been made in terms of the payment of minimum (not living) wages, setting up better – but not fully adequate – procedures for safe handling of chemicals and the provision of basic medical care and educational facilities for all temporary and permanent workers.

Recommendations
In chapter 5 the authors – Glocal Research and ICN – present 7 recommendations to the management of the plantations, Rainforest Alliance and Unilever. They include providing all mandatory benefits to permanent ánd temporary workers and not restricting workers in association with the union of their choice. Providing training for workers on safe chemical handling practices, especially for migrants who are not speaking Tamil, as well as paying overtime wages in line with legal requirements are crucial as well.

Response by Rainforest Alliance, Sustainable Agriculture Network and Unilever
Rainforest Alliance (RA) immediately started a formal complaint procedure after the draft report was submitted to them. After research audits that took place in May 2016 in response to the report, RA said it did not find any violations of their code except non-payment of leave days for temporary workers in Kairbetta estate.
In its response Unilever more generally states that ‘’progress in the Indian tea industry is being made but there is more to be done….”. 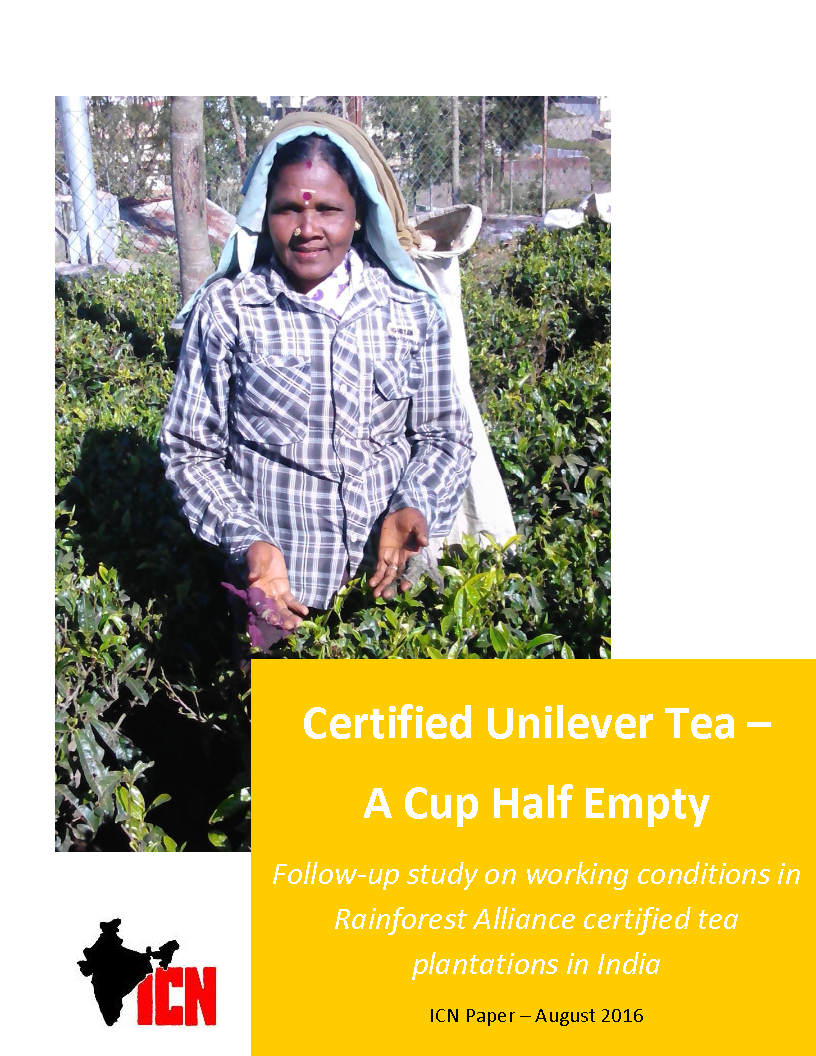