Modern slavery, child labour and unsafe work in Indian granite quarries – What should companies do?

New research, commissioned by ICN and Stop Child Labour, shows that modern slavery, low wages, hazardous and unhealthy working conditions frequently occur in South Indian granite quarries. Child labour was also found in a number of quarries.
There is a big difference in working conditions between permanent employees (especially supervisors) and temporary workers (70% of the workers). The first group receives safety equipment, health insurance and a contract of employment, while temporary workers, who perform heavy manual labour, must disregard these basic labour rights.

The research shows that granite from the researched quarries is imported by 31 natural stone companies and 3 banks, including the Dutch companies Arte, Jetstone, Michel Oprey & Beisterveld (MO & B), Kerasom and the Belgian Beltrami and Hullebusch. Furthermore, companies from Canada, Germany, Liechtenstein, Austria, Spain, the UK and the USA(*). China is also a major importer, processor and re-exporter of Indian granite for the international market.
Only a few companies are members of sustainability initiatives aimed at improving working conditions in the natural stone sector, but the problems in quarries are barely tackled. The draft report was sent to the 34 companies, including the banks, for comment. Only Dutch companies, the Belgian Beltrami and the RBS bank reacted.

From quarry to importer
India is one of the top producers and exporters of granite, a natural stone type that is used, among other things, for wall and floor tiles, tombstones and counter tops. Governments in the west are an important end user of granite, including for buildings, paving and squares. Half of the worldwide export of raw granite comes from India.
The research was carried out in the South Indian states of Andhra Pradesh, Telangana and Karnataka, which provide 75% of Indian granite production. 22 quarries have been investigated and six locations where residual stone from granite quarries is processed. Ten of the granite quarries investigated have a direct relationship with one or more foreign importers. Other quarries also produce granite for the export market, but it is traded via brokers.

Modern slavery
More than 70% of the workers are temporary workers, mostly migrants, who receive a daily wage or are paid by job. The group management and the mediators manage to bind the workers through advances that amount to amounts equal to the salary of one to three months and loans with excessive interest rates. Almost a quarter of the workers have loans with 24% to 36% interest. Around half of all workers have large debts with the quarry owner or a broker. This makes employees vulnerable to tied labour because they can not change employer as long as they have not paid their debts. In 9 of the 22 quarries examined, there is debt bondage.
Labor brokers recruit most workers but do not offer them a written contract and do not respect legal requirements. The workers usually come from disadvantaged groups, such as the Dalits (the so-called ‘casteless ones’), the lower castes above and the Adivasi (tribals). They are extra vulnerable because of their low social status in Indian society.

Health and safety in great danger
None of the quarry workers is affiliated with the statutory pension fund or has health insurance. This while their profession is very dangerous and they run many health risks. Many are injured and fatal accidents are often not reported. Furthermore, the quarry is a dusty and noisy environment, which makes workers very susceptible to diseases such as the common lung disease silicosis, so they often do not get older than 40 or 50 years. Back and eye complaints are also common. In none of the visited quarries were workers who use drill drills seen with helmets, masks or ear protectors, except in labour inspections. Approximately 60% of the workers say they spend a considerable part of their wages on medical care.

Less child labour, but certainly still present
At the start of this century many children still worked in granite quarries, but this has been significantly reduced by intervention by the government, the business community and social organizations. Nevertheless, working children were found in seven researched quarries. No other quarry turned out to have an active policy to prevent child labour and to rehabilitate working children.
Child labour is still prominent in the processing of residual stone to gravel and ‘cobblestones’, also for export. Almost 80% of the residual stone is processed by women and children. Children under the age of 14 make up 3% of the workers who process residual stone and 5% between 15 and 18 years.

Low wages, poor housing and no active trade unions
Given the long working days, wages in half of the quarries under investigation do not meet the legal requirements. Overtime is regularly paid in snacks and alcoholic beverages. The amount of the daily wage varies, depending on the type of work, from € 3.55 to € 6.19 per day. The housing of workers is very poor. Workers share small rooms with hardly any ventilation, sanitation and privacy. No clean drinking water is present in half of the quarries examined. No active trade union was present in any of the quarries under investigation.

Recommendations
The report makes a number of recommendations to companies, sustainability initiatives, the Indian government and the EU and its member states. Duty of due diligence by companies is necessary to address the violation of human rights, increase chain transparency, identify risks and implement improvement plans The Indian government must implement its own legislation and the EU and its Member States must strengthen their purchasing policy and purchase sustainable granite. 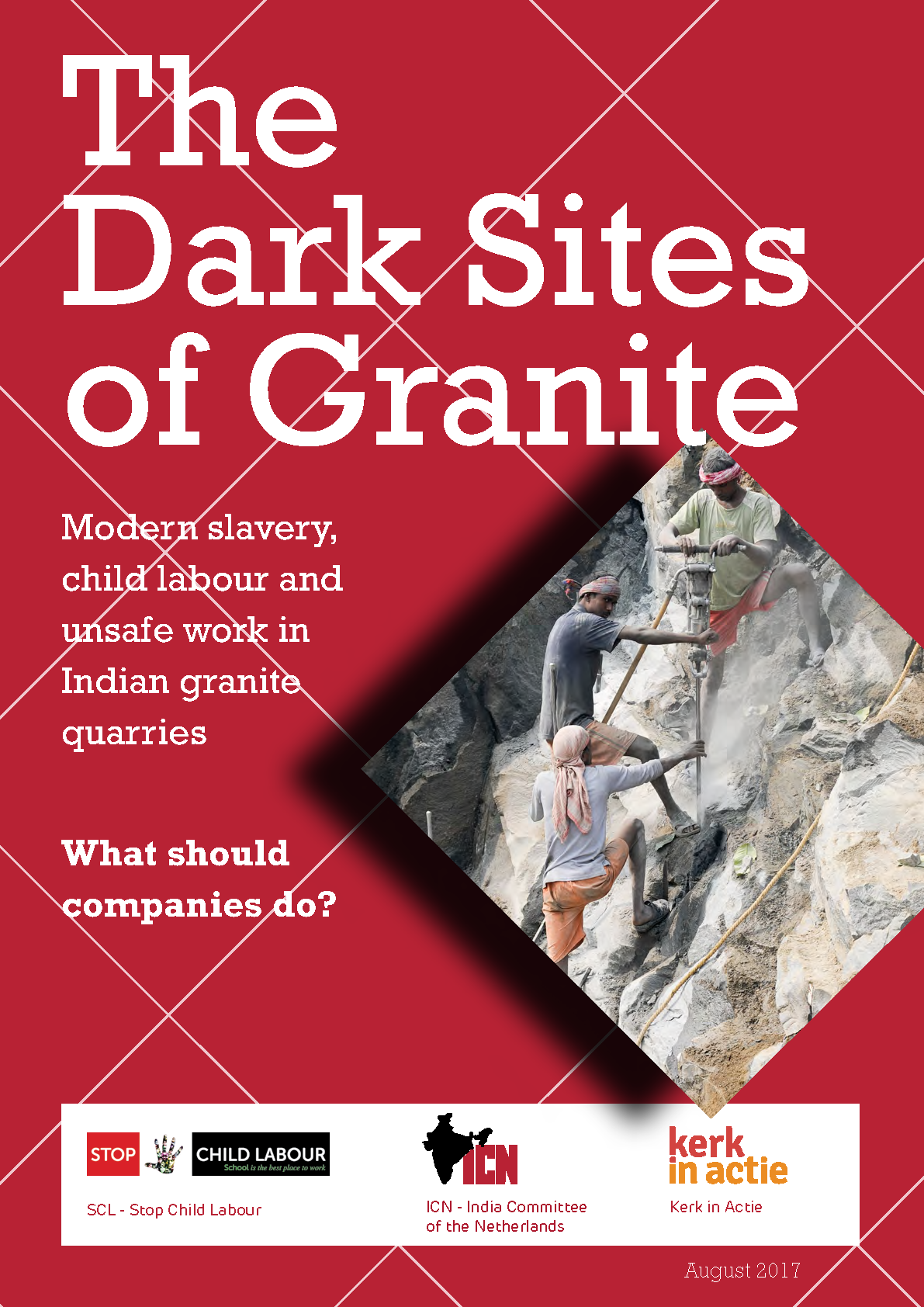 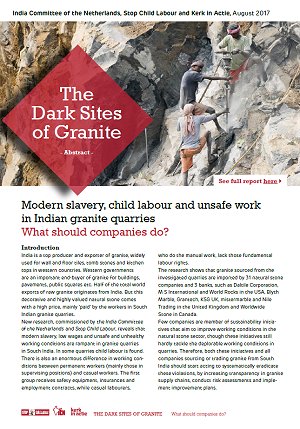