A recent report gives a shocking account of the inhuman living and working conditions of workers involved in sandstone quarrying in the state of Rajasthan in India. Child labour, bonded labour, exploitative wages, rampant occupational diseases like silicosis and bronchitus, alcoholism, as well as women’s threathened livelihoods, are some of its main features.

The situation is reinforced by a local governance structure that is dominated by quarry owners and dominant ‘high’ castes while the workers are mainly dalits or ‘low castes’.

“This report, published by the India Committee of the Netherlands (ICN), is the result of independent research into sandstone quarrying in Budhpura village, Bundi district, Rajasthan state, India.

The report provides information on the quarrying of natural stone in India in general and in Rajasthan in particular as a background to the specifics of sandstone quarrying in Budhpura village. It digs into the social, economic, and environmental impacts of quarrying for the local population, distinguishing between those who benefit most and those who hardly benefit. It turns out that huge profits are made in this business, but that those who do the hard work do not share in the generated wealth.

Budhpura village is the central focus of this study, but many of the findings apply to the entire natural stone production and export of Rajasthan. The choice for Budhpura as the main focus of this study was made since the Dutch town of Kampen has used sandstone from Budhpura for repaving its city centre. The report informs us that the export of sandstone to the Netherlands is considerable, and increasing.

In the context of its ‘responsible business’-programme, the India Committee of the Netherlands, together with the Netherlands Society for Nature and Environment, is currently looking at the natural stone sector. ICN is attempting to engage the Dutch natural stone industry in dialogue and collaboration, in an effort to jointly address social and environmental issues associated with the production and processing of natural stone.” 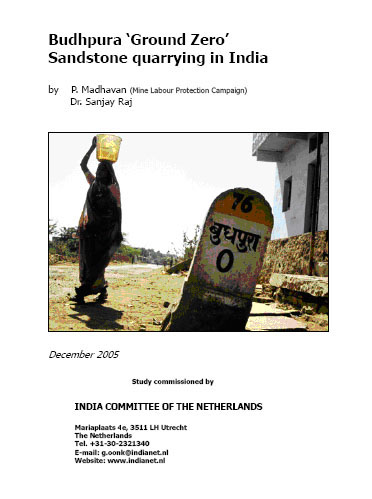