More than 416.000 children under the age of 18, of which almost 225.000 younger than 14, are involved in (often bonded) child labour in India’s cottonseed fields. Most of them are girls. They work in the states of Andhra Pradesh, Gujarat, Karnataka and Tamil Nadu. Compared to the 2003-2004 harvest season the total number of working children has risen. It only decreased in Andhra Pradesh because of local and international pressure.

These are some important results from the study ‘Child bondage continues in Indian cotton supply chain’, published on behalf of the India Committee of the Netherlands ICN), the International Labor Rights Forum (ILRF, USA), OECD Watch, German Agro-Action and OneWorld Net NRW (Germany). The report is based on field research and has been written by well-known expert Dr. Davuluri Venkateswarlu, director of Glocal Research, who authored several other reports on this issue since 2001.

ICN´s director Gerard Oonk says: “The report makes it chillingly clear that our cotton products are tainted with massive bonded child labour. The companies involved, both Indian and multinational, governments and international organizations should make every effort to get the children out of this pernicious work and into school. Together with organizations in India and other countries we will certainly urge them to do so.”

Horrendous working and living conditions
Children are made to work 8 to 12 hours a day and usually earn between Rs.20 and Rs.30 a day (hardly half a euro). They are routinely exposed to poisonous pesticides and often trafficked as migrants from other districts and even states. In Tamil Nadu and Gujarat more than 80% of the children is trafficked. E.g. North Gujarat ‘receives’ tens of thousands of children from the neighbouring state of Rajasthan every year. They often live in make-shift shelters and are very vulnerable to mental, physical and sexual abuse.

The report contains a number of cases on the plight of children working in the cotton fields. These include stories of two girls being raped, three children being killed due to pesticide exposure, children forced to leave school because of a drinking father and a loan to repay, and the work schedule – from 5.30 AM to 6.30 PM – of a migrant child. The overwhelming majority of the children working in the cotton fields are Dalits (‘untouchables’, officially called ‘scheduled castes’) or Adivasi (tribals).

Indian companies do nothing despite promises
More than thirteen big Indian companies and two multinationals, Monsanto and Bayer, are involved in this ‘modern form of child slavery’. The ones which have outsourced the largest production to farmers are the Indian companies Nuziveedu, Raasi, Ankur and the American multinational Monsanto (including its Indian joint venture partner Mahyco). They make use of more than 200.000 children employed by farmers to which they have sub-contracted the cultivation of their high-technology BT cotton seeds. The report ‘The Price of Childhood’ (October 2005) by Dr. Venkateswarlu provided ample evidence that companies outsourcing their seed production to farmers, are paying almost 40% too little to enable them to hire adults for the local minimum wage of Rs.52 instead of children.

After years of both local and international advocacy on the issue the two multinational involved, Bayer (though its subsidiary Proagro) and Monsanto started working on the issue, both by monitoring and by giving slightly better prices to farmers, though much remains to be done (see ‘Seeds of Change’ , May 2007). However the big Indian companies have hardly done anything, despite resolutions and action plans by their associations from 2003 onwards.

Movement against child labour in the cotton fields
Opposition in India against the exploitation of children in the cottonseed fields is growing, especially in Gujarat and Andhra Pradesh. In Andhra Pradesh this has been spearheaded for years by the MV Foundation and more recently by the Child Rights Protection Forum. They have been able to withdraw thousands of children from work in the fields.

This week Andhra Pradesh witnesses a new upsurge of action against this. In the presence of a 3-member team of the National Commission for the Protection of Child Rights (NCPCR) a public hearing where children give testimony, field visits and visits to officials are organized.

Last week Gujarat saw a similar range of activities organized by the Dakshini Rajasthan Majdoor Union, a union of workers and contractors that are pressing for improved working conditions, wage hikes and checking of employment of young children. Also the chairperson of the NCPCR was present for a public hearing and other activities. This has been the culmination of years of work in which the union e.g. tried to stop the trafficking of tribal children from Rajasthan to Gujarat. 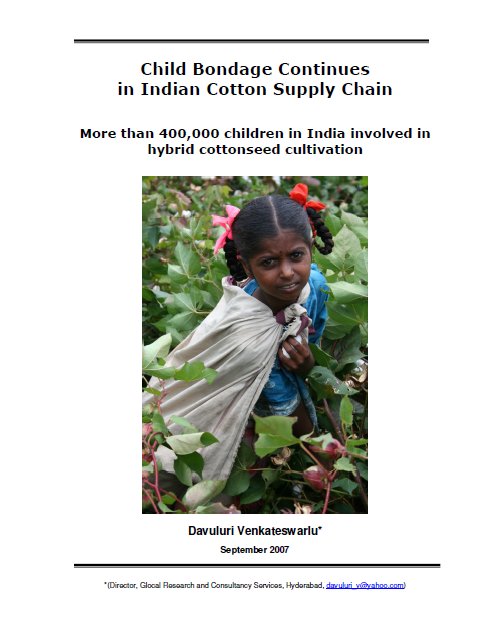