Almost half a million Indian children are working to produce the cottonseed that is the basis for our garments and all the other textile products that we use. Around 200,000 of them are below 14 years of age. This is one of the shocking results of the new study Cotton’s Forgotten Children by India’s long-term expert on the issue, Dr. Davuluri Venkateswarlu.
It is equally shocking that the number of children working in the cotton seed fields has increased with almost 100,000 since the last all-India study on this issue in 2010. Children below 14 constitute around 25% of the workforce on the fields of the farmers that supply their seeds to both Indian and multinational companies. Another 35% of the workforce are children between 14 and 18 years of age.

The report criticises the Indian state governments, especially those of Gujarat and Rajasthan, for ‘not paying serious attention to tackle the issue’ and ‘being in the denying mood’. On the role of the seed companies it states: ‘The response of the seed industry as a whole to address the problem of child labour is minimal’.

Long working days – Exposed to pesticides
Children below 14 – of which two-thirds are girls – are employed in the seed fields on a long-term contract basis through loans extended to their parents by local seed producers, who have agreements with the large national and multinational seed companies. Children are made to work 8 to 12 hours a day and are exposed to poisonous pesticides used in high quantities in cottonseed cultivation. Most of the children working in cottonseed farms belong to poor Dalit (‘outcaste’), Adivasi (tribal) or Backward Castes families. Around 70% of the children are hired or even trafficked from other states while 30% is ‘family labour’. Most are school-dropouts.

Hopeful signs
There are also some hopeful signs. The number of children below 14 working on seed farms – in proportion to the total workforce – has dropped in all states. In Andhra Pradesh and Tamil Nadu there was a significant decline of 42% and 69% respectively of young children working in the seed fields.

The report also recognizes a number of initiatives undertaken by multinational companies like Bayer, Monsanto and DuPont, some local companies, government agencies, Unicef, NGOs like MV Foundation in Andhra Pradesh and a union like DRMU in Gujarat which helped to reduce the number of young working children.

However due to the very substantial increase of production area, especially in Gujarat and Rajasthan, the total number of working children has nevertheless increased substantially. The number of adolescents doing this work has increased since 2010 with 70,000 and the number of young children with almost 30,000.

Below minimum wages for women
The other main issue in the new report is the payment of wages below the official minimum wage, especially to women. For specific tasks mainly allocated to women and children – especially the labour-intensive cross-pollination – wages are paid that are substantially below the official state or zonal minimum wages. This happens in all the states. Despite this and earlier reports on the issue (e.g. Wages of Inequality, December 2012) this issue has not yet been tackled effectively by government and companies and has hardly been taken up by civil society.

Recommendations
The 47-page report contains 11 recommendations for both companies, the National Seed Association of India and the (state) governments to tackle child labour, below official minimum or living wages and other labour rights violations.

A few of these recommendations are: 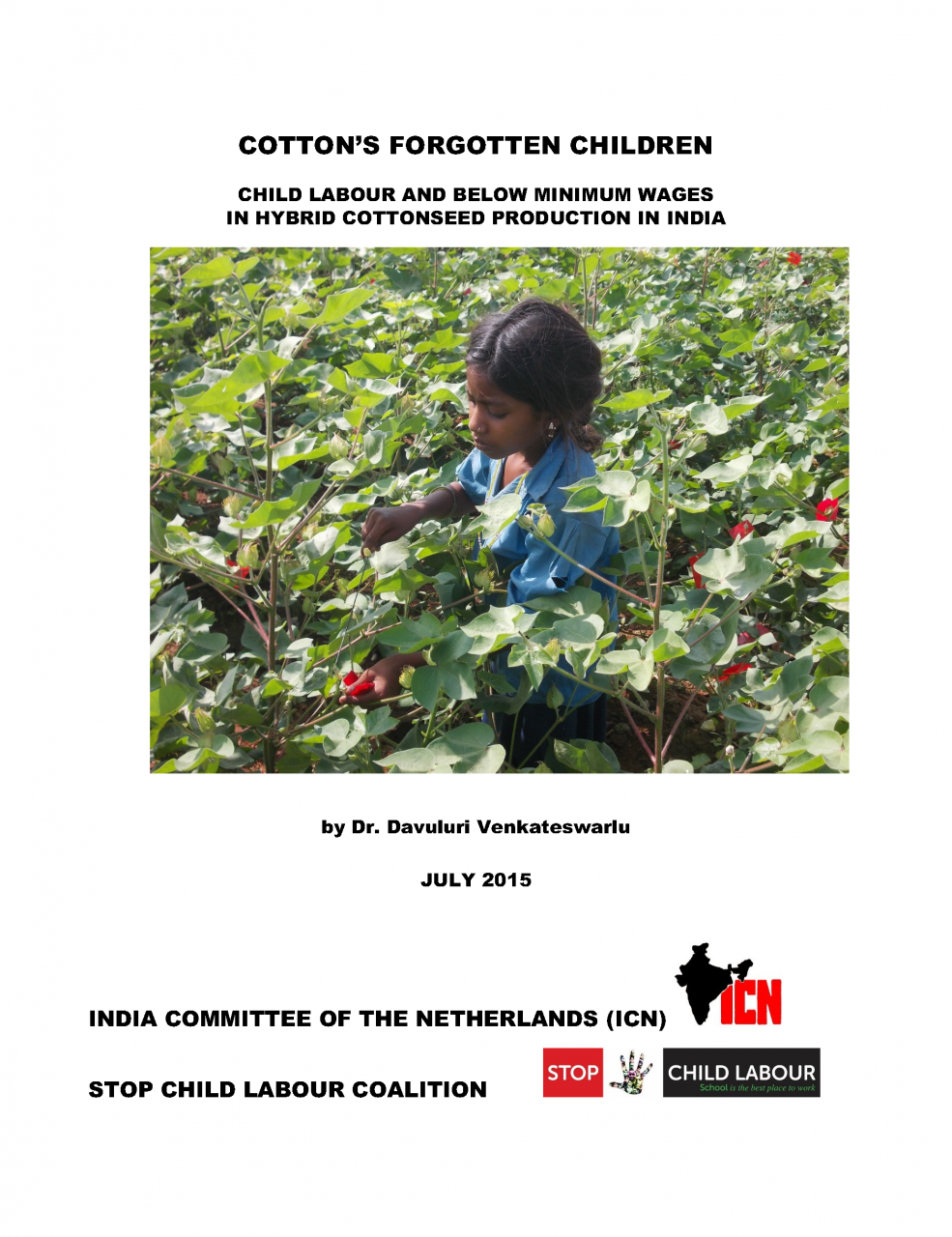