The Indian company Bejo Sheetal, joint venture partner of Bejo Seeds from The Netherlands, tolerates widespread child labour at the farmers who supply seeds to them. The farmers providing seeds to Nunhems India – part of Nunhems Netherlands – work almost without using child labourers younger than 14.
This is the main conclusion from the report A Tale of Two Companies – The difference between action and inaction in combating child labour, today published by the India Committee of the Netherlands (ICN) and the campaign ‘Stop Child Labour – School is the best place to work’.

Bejo Seeds and Nunhems: with and (almost) without child labour
The Dutch vegetable seed company Bejo Seeds is as a joint venture partner of Bejo Sheetal jointly responsible for the extensive child labour on the fields in India. A sample taken from 30 farmers who supply to Bejo Sheetal shows that 18% of the workers who grow pepper seeds are children under 14. In the cultivation of tomato seeds this is 12%. The large-scale child labour was also evident from the report Growing up in the danger fields published by the India Committee of the Netherlands (ICN), in 2010. The current situation has hardly improved.
Nunhems has begun to eliminate child labour years ago, prompted by earlier reports of the ICN on child labour in the Indian seed production. A clearly promoted policy of ‘zero tolerance’ for child labour, a control system with both incentives and penalties, and contributions to the education of children, has reduced the number of young working children to almost 1% of the workers growing seeds for Nunhems.

Both companies: hazardous child labour of teenagers and underpayment women
In addition, at the farmers supplying to Nunhems India and Bejo Sheetal nearly 30% of all workers are children between 15 and 18 years. Hazardous labour for children older than 14 years will be banned in India soon. And this work is certainly hazardous. Children work long hours and are often exposed to dangerous pesticides. They also often drop out of school at an early age.
Nunhems and Bejo Sheetal also have another big problem. Women and girls – over 80% of the workers – often earn less than the official minimum wage. For labourers in Karnataka this wage is more than € 2.00, but women usually earn no more than between € 1.36 to € 1.75. For men’s tasks such as spraying of pesticides and ploughing is paid 40-70% more than “women’s tasks” like  weeding and fertilization of the seed plants. Also the same task is paid differently to men and women.

Nunhems India and Bejo Sheetal are both leading companies in the Indian seed market. They are among the top 10 of vegetable seed companies and have a combined share of 20% in the market of pepper and tomato seeds. The production takes mainly place in the southern Indian state of Karnataka.

Response Bejo Seeds and Nunhems positive
Both Nunhems and Bejo informed the India Committee of the Netherlands (ICN) that they are going to address the paying of women below the minimum wage and the difference in wages between men and women. In his response to newspaper Trouw on June 29, 2013 director John-Pieter Schipper of Bejo Seeds says: “We take this very seriously, like three years ago. We immediately did include in our contracts that we do not allow child labour and underpayment.” Trouw further quotes him saying that the previous measures were apparently insufficient and that, after being informed by the ICN about the results of the new research, he told Bejo Sheetal that he would suspend all business until they have their affairs in order. Bejo Sheetal now will pay a bonus to Indian farmers who can prove that they do not employ children, and who pay wages according to the rules, says Schipper in Trouw.

Majority of workers are Dalit women and girls
Half of the seed workers are Dalits (‘untouchables’) and Adivasi (‘tribals’), and most of the others are from the lowest castes, just above the Dalits. Especially Dalits are often treated ‘differently’, according to the report. The report Wages of Inequality from 2012 explains: Dalits are often insulted and humiliated. Furthermore, workers who are not day-labourer but working throughout the whole year with one farmer are almost all Dalits. They are permanently ‘at the disposal of the farmer’ and usually work about 12 hours a day. Their overtime is not paid. Apart from that, only a minority of the children is part of the farmers’ family. The majority (78%) of the children is ‘hired’.

Child labour in Indian vegetable seed production: more than 150,000 children
The report Growing Up in the Danger Fields, published in 2010, showed that over 150,000 children, of which almost 60,000 under 14 years, are involved in the production of vegetable seeds in three states (Karnataka, Maharashtra and Gujarat). At farmers supplying pepper seeds to Nunhems and to Bejo Seeds were 24.3% resp. 12.5% of the labourers younger than 14. Across the board, the number of children decreased approximately with 25% according to the research A Tale of Two Companies. But the decrease was bigger at companies like Nunhems and the American Syngenta, as well as in areas where civil society organizations and the government have been active. Bejo Seeds now has to ‘catch up’. Both farmers pepper seeds to Nunhems India as to Bejo Sheetal performance were then respectively. 24.3% and 12.5% of workers under 14 years.

In November 2010 the India Committee of the Netherlands and FNV Mondiaal published the report No Child Labour – Better Wages. The report – now being re-issued with together with the report A Tale of Two Companies – was based on field research in the Indian state of Andhra Pradesh and did conclude that the elimination of child labour led to a remarkable increase in the wages of  adult farm workers.
In two villages the elimination of child labour between 2005 and 2009 resulted in an increase in wage for cotton workers of over 150%. In the villages where child labour continued the wage increase was just over 50%. Since child labour was eradicated labour became relatively scarce and adults had more opportunities to negotiate their wages and working conditions. For example, they don’t have to pay interest any more for the loans they are taking. 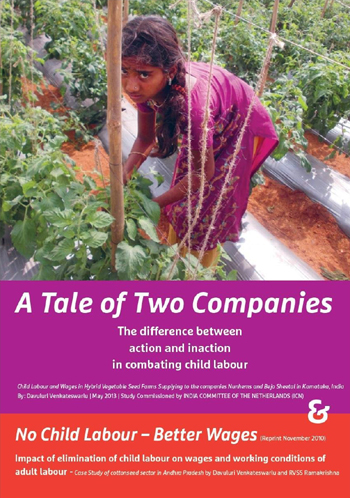