10,000 signatures for living wage handed over to Minister Ploumen

Consumer fed up with starvation wages in garment industry

Thousands of Dutch consumers want Minister Ploumen [of Foreign Trade and Development Cooperation] to provide a living wage for garment workers. Through a petition of Clean Clothes Campaign and the India Committee of the Netherlands 10,734 Dutch people call on Ploumen to do so. 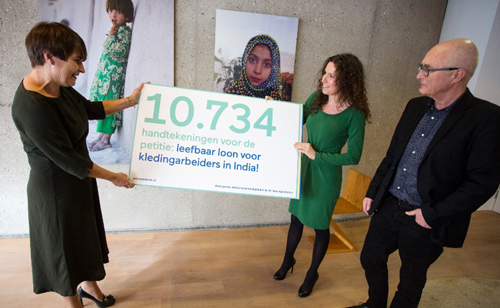 “Consumers are fed up to be confronted again and again with bad news about the garment industry. They no longer want to contribute to the exploitation that takes place daily in garment factories. With this handover consumers give a clear signal to fashion brands that they should pay a fair wage to workers and that the government must ensure this,” said Tara Scally of Clean Clothes Campaign.

Minister Ploumen indicates that companies have to make a living wage part of their procurement process: “A lot has to be paid from the current cost of a few euros per garment: the procurement of raw material, wages, as well as improvements in working conditions. The calculation of the price of a garment should be adjusted. That is possible, by also looking at a living wage in the region, how many hours a person works on a piece garment, which fabrics are used and what investments are needed for a secure and clean production.”

Research on wages in India
The petition has been prepared following a study by Clean Clothes Campaign and the India Committee of the Netherlands. Conversations with hundreds of garment workers revealed that no one received a living wage and that a third of the garment workers took home even less than the legal minimum wage at the end of the month. Following the conclusion of the report CCC and ICN urge the government to ensure more transparency from companies. Scally: “Consumers have the right to know where and under what circumstances their garments are made. Companies should be open about their suppliers so that it can be verified.”

Textile covenant
In July last year garment companies, NGOs, trade unions and the Dutch government agreed on the Covenant Sustainable Garment and Textile. In the covenant companies, organizations and government agreed to review together the process of textile production in developing countries and to make it sustainable. The Clean Clothes Campaign (CCC) did not sign the covenant because of the absence of concrete agreements and results and because there is no space for structural inspections by trade unions and NGOs in the production countries themselves.

The reaction of Minister Ploumen was promising: “Next week the first meeting shall take place of the living wage working group of the covenant. There I will insist on concrete implementation of the roadmap with clear steps and a clear timetable. There will also be proposals from our side for this. Living wage is a major theme in the garment industry, parties can immediately start working on it.”

Also starvation wages and strikes in Bangladesh
Not only in India the wage is far too little to live on. In Bangladesh there are protests for wage increase since December. Dozens of human rights activists and trade union leaders are imprisoned. Hundreds of complaints have been filed against anonymous workers, a tactic used to silence and threaten workers who stand up for their rights. More than fifteen hundred workers have been laid off for no apparent reason. At the same time as the presentation of the petition, CCC is present at the Bengali embassy, where together with trade unions FNV and CNV a protest takes place against the arrests of trade union leaders and activists in Bangladesh.