Inhuman labour conditions and wide scale environmental damage are part and parcel of natural stone production in India. This is the message of the report From Quarry to Graveyard – Corporate social responsibility in the natural stone sector(1) published today by the India Committee of the Netherlands. The report describes the Dutch natural stone trade and details how Dutch companies and trade organisations are starting to take an interest in corporate social responsibility.

Heavy and unsafe work, substandard wages, child labour, bonded labour, discrimination of Dalits (‘outcastes’, officially termed ‘scheduled castes’ ) and Adivasi (tribal populations) seem to be are part and parcel of the production and processing of natural stone in India. The report describes environmental damage such as disturbance of water systems, loss of agricultural and forest lands, irresponsible waste disposal and high emissions of dust particles. Not to mention widespread illegal quarrying and corruption.

Dutch natural stone companies do not deny these issues, but do not yet know how to deal with them. The majority of the companies and trade organisations is not convinced that they have a role to play in making the natural stone trade more sustainable. As long as there is no demand from Dutch consumers for sustainably produced stone, companies, and this is especially true for ‘price fighters’, do not feel compelled to look into such issues. According to Dutch government policy, from 2010 onwards sustainability will be a decisive factor for all public purchasing. However, for natural stone no concrete criteria have been formulated as yet. Those companies and trade organisations that are beginning to take an interest in responsible entrepreneurship, put the accent is mainly on health and safety and waste disposal issues relevant for the natural stone sector in the Netherlands.

To get the concept of international chain responsibility on the agenda of Dutch stone traders and retailers, the India Committee of the Netherlands (ICN) together with the Dutch Association for Nature an the Environment (N&M) have initiated a Working Group on Sustainable Natural Stone. A number of companies and trade organisations are now participating in this Working Group and developing a Code of conduct for the Dutch natural stone sector to go by. In their input the ICN and N&M stress that Dutch companies have a shared responsibility for the social, economic and environmental aspects of the production of natural stone. International law (e.g. ILO conventions) and national legislation should form the basis of any serious responsible business initiative. Other essential ingredients are the involvement of stakeholders in natural stone producing countries, transparency and reporting, as well as independent verification of compliance with legislation or voluntary standards. ICN and N&M offer Dutch companies the possibility to try out the concept code of conduct in a pilot project, in close collaboration with stakeholders in India.

In 2002, the Netherlands imported natural stone worth about € 138 million (slate and sandstone excluded). The import from ‘developing and newly industrialising’ countries including China, India, Brazil, Turkey and South Africa) amounted to € 55 million. About one third (€ 17 million) of the natural stone originated from India. India is after China the most important natural stone exporting country in the world.

(1) The full title is: “From Quarry to Graveyard. Corporate social responsibility in the natural stone sector. Labour, social, environmental and economic issues in the quarrying, processing and trade of natural stone from developing countries. Focus on India and the Netherlands”. 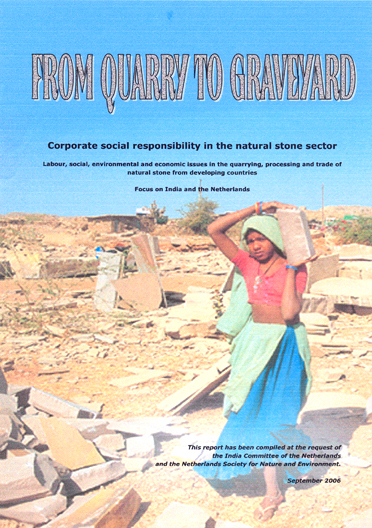