Big garment brands and retailers have their products made under exploitative and unhealthy conditions by girls in Tamil Nadu, South India. The girls, mostly younger than 18 and from a Dalit (‘outcaste’) background are employed under the Sumangali Scheme. In its worst form, this employment scheme stands for bonded labour, as described in Captured by Cotton, a report published today by the Centre for Research on Multinational Corporation (SOMO) and the India Committee of the Netherlands (ICN).
The report features case studies of four large manufacturers: Eastman Global Clothing Exports, KPR Mill, Bannari Amman, and SSM India. These enterprises produce for Bestseller (e.g. Only, Jack & Jones), C&A, GAP, Diesel, Inditex (e.g. Zara), Marks & Spencer, Primark, Tommy Hilfiger, and many other European and US garment companies. A number of companies have undertaken steps towards the elimination of the Sumangali Scheme, but abusive labour practices remain widespread.

Sumangali girls
The Sumangali girls are recruited with the promise of a decent wage, comfortable accommodation, and, the biggest attraction, a considerable sum of money upon completion of their three-year contract. This lump sum, varying between 400 and 800 euro, may be used to pay for a dowry. The reality stands in sharp contrast to the alluring promises: wages below the legally set minimum, excessive overwork (days of 12 hours are no exception), non-payment of overtime work, restricted freedom of movement, lack of privacy, no possibility to lodge complaints or get redress, unhealthy and unsafe working conditions, etc. This situation fits the definition of ‘worst forms of child labour’ as laid down by the International Labour Organisation (ILO) for children up to 18 years old. This is a clear breach of international labour standards.

The promised sum is not a bonus, but is made up of withheld wages. In a number of documented cases girls have not received the lump sum they were entitled to, despite having completed the contractual three year period.

The girls’ freedom of action is severely restricted with guards keeping a constant eye on them. They are compulsory accommodated in basic dormitories, often within the compound of the factory. This also means workers hardly have a chance to get in touch with trade unions or advocacy groups.

SOMO and ICN have shared drafts of the report with the companies that are named in the report. Several companies have responded with detailed feedback that has been processed in the final version of the report, including C&A, Oxylane and Tesco. Other companies did not respond at all, or only superficially.

Garment companies promise improvements
Garment brands and retailers have become aware of the exploitative nature of the Sumangali Scheme, through research conducted by NGOs, media reports, as well as in some cases by their own social auditing. A number of brands and retailers have taken a clear stand against these practices. Some companies have developed corrective action plans to address the excesses of the Sumangali Scheme. SOMO and ICN research shows that since August 2010, promising improvements have been implemented at Eastman as well as at KPR Mill.

Nevertheless, the occurrence of the Sumangali Scheme and other labour rights violations in the Tamil Nadu garment industry is still widespread. All brands sourcing from this region run an enormous risk of having Sumangali workers in their supply chain encounter other abusive labour conditions.

Some companies explicitly state their commitment to work with other companies and civil society stakeholders in abolishing the Sumangali Scheme, including C&A, Bestseller, Primark and Tesco. The public statements they have published sound promising, but lack concrete time-bound actions. SOMO and ICN urge all companies that are customers of the Tamil Nadu garment industry to immediately take concerted concrete action to end the Sumangali Scheme and other labour rights abuses. SOMO and ICN will continue to monitor corporate policies and practices with regard to respecting labour standards in the global garment industry. 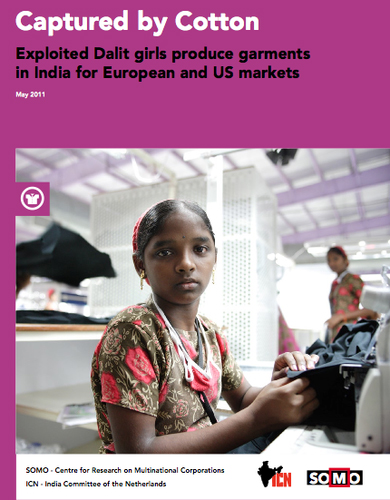