European and US garment brands and retailers have failed in their attempts to structurally improve labour conditions at their suppliers in Tamil Nadu, South India. Despite corporate promises and a range of well-meaning initiatives, workers, mostly very young women, continue to suffer exploitative working conditions. Up until today, thousands of women in the garment and textile industry in Tamil Nadu work under recruitment and employment schemes that amount to bonded labour. These are the findings by the Centre for Research on Multinational Corporations (SOMO) and the India Committee of the Netherlands (ICN) presented in the report Maid in India, published today.

Follow-up research
The new report is a follow-up on the 2011 report Captured by Cotton, that first documented the exploitative conditions in the Tamil Nadu garment industry. In reaction to this report, European and American clothing brands and retailers promised to curb labour abuses and in some instances also took concrete steps to do so. Now, one year later, SOMO and ICN look at what has been achieved. Thorough field research has been conducted, including interviews with more than 180 workers, an analysis of export data, and research into corporate compliance initiatives. SOMO and ICN have reached out to more than 70 US and European brands, retailers and buying houses, including wellknown brands as C&A, Diesel, American Eagle Outfitters, Primark, Decathlon, Philips van Heusen (Tommy Hilfiger), Quicksilver, as well as lesser known players such as Crystal Martin, that source from the investigated manufacturers. Maid in India documents some improvements brought about under pressure of active buyers, but also describes how major abuses continue to occur.

Major problems persist
Maid in India features case studies of Eastman Exports, KPR Mill, SSM India, and Bannari Amman, four large Tamil Nadu based garment manufacturers that produce for Western brands. You will find the full list of brands that feature in the report, here.
Workers are recruited within as well outside of the state of Tamil Nadu. The majority of the workers are Dalit (outcaste) girls under 18 from poor families, who are lured with promises of a decent wage, comfortable accommodation and, in some cases a sum of money upon completion of the contract that may be used for their dowry. These recruitment and employment practices are often referred to as ‘Sumangali scheme’.
Labour migrants often live in strictly supervised factory-owned hostels where they have little opportunity for contact with their families, let alone with trade unions or labour advocates. Workers make long hours, including forced overtime, in some cases even up to 24 hours on end, for low wages, and under unhealthy conditions. Verbal and physical abuse is frequently reported. Often, completing the contract period is a condition to receive the lump sum amount, which is not a bonus but made up of withheld wages. Even if the women manage to finish the term, they often do not receive the promised amount. Trade unions are weak and face enormous opposition. The situation is most critical in the spinning units where yarn is produced.

What is needed?
Garment brands and retailers have made promises to abolish labour abuses at their suppliers. Some companies are part of corporate compliance or multi-stakeholder initiatives; others are developing their own approach, including in-depth investigations and social audits at their suppliers. These efforts have had some positive effects, especially in the garment-producing units that supply directly to Western buyers. Still, SOMO and ICN conclude that too many buyers are lagging behind.
To address continuing labour abuses both manufacturers and buyers should step up their efforts by committing to a concerted approach and to concrete and measurable steps, taking into account the whole supply chain with an emphasis on second tier suppliers. For real change, scale is needed. Corporate and other initiatives, certification bodies and business associations should push their members to commit to real action, or discipline them. The voluntary character of compliance activities should urgently become more binding. Freedom of association and the right to bargain collectively are key rights that enable workers to defend their rights. Both manufacturers and buyers should actively ensure these rights are respected. 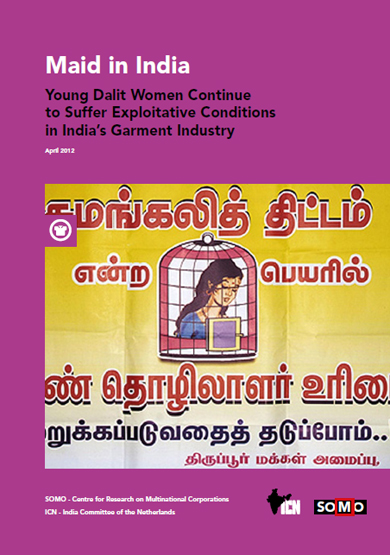