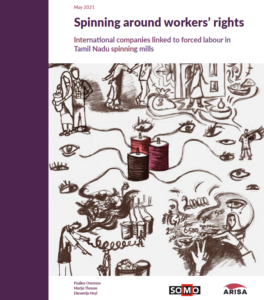 There is a serious risk that workers are trapped in forced labour conditions in the Indian spinning mills that produce yarn and fabrics for the international clothing and textile industry. Large-scale research undertaken by SOMO and Arisa, of 29 spinning mills in the Indian state of Tamil Nadu, presented in the report ‘Spinning Around Workers’ Rights’, has revealed this exploitation. On top of that, the already vulnerable workers in this sector are severely affected by the ongoing Corona crisis.

‘I am unhappy, I feel trapped. This makes me angry. I feel like running away from this place, but I can’t leave because of my family’s situation.’ (Female worker at a spinning mill)

Very poor conditions
Labour conditions in Tamil Nadu spinning mills are appalling. Under pressure and threats, workers are made to work excessive overtime. Many workers come from other states in India, do not speak Tamil and belong to the lower castes. Employers take advantage of the vulnerable position of these labour migrants, who are often recruited with false promises and end up living miserably in hostels that are by and large isolated from the outside world. Since the Corona crisis this situation has only worsened: more forced overtime, less salary and mass dismissals.

Pauline Overeem, Researcher at SOMO: ‘Based on our research, we conclude that the living and working conditions in the textile industry in Tamil Nadu are deplorable. In the worst case, this amounts to forced labour. Buying companies must take measures to prevent forced labour from occurring in their supply chains, and take account of the risk of forced labour in their purchasing practices.’

International companies linked to the spinning mills
Yarns and fabrics from Tamil Nadu mills are processed into garments and household textiles for European and North American markets. But because of the complexity of the supply chain, and a lack of transparency about trade flows and the precise buying relations of brands and retailers, it is very difficult to confidently map all links from spinning mill to consumer. Through painstaking research, SOMO and Arisa did manage to find direct and indirect links between the 29 spinning mills under investigation and ten companies operating internationally: Carrefour, GAP, IKEA, Marc O’Polo, NEXT, Sainsbury’s, Tesco, The Cookie Company Group, WE Fashion, and Zeeman. In some cases, SOMO and Arisa found links between the investigated mills and these international companies; in other cases, there are links between the mother company that encompasses the mill, and the international companies.

Diewertje Heyl, Researcher at Arisa: ‘The risk of forced labour in the spinning mills in Tamil Nadu is an issue that concerns the entire international garment and textile industry. The problem is not limited to the spinning mills that we investigated and the customers that we identified. International companies that have their products made in, for example, Bangladesh and Sri Lanka, using yarns and fabrics produced in Tamil Nadu, are potentially implicated. However, because of the lack of transparency, many international companies fly below the radar screen.’/em>

The research
The new report by SOMO and Arisa uses the 11 indicators for forced labour developed by the International Labour Organisation of the United Nations (ILO), to assess the working and living conditions in the 29 spinning mils. The research involved interviewing 725 workers, with additional research into the supply chain relations between mills, garment factories and international brands/retailers.

Garment and textile sector notorious for abuses
Tamil Nadu has, for years, been infamous for the poor working conditions in the garment and textile industry based there. Since 2011, SOMO and Arisa have been conducting research into working conditions in this industry. Unfortunately, improvements are insufficient, especially further up the supply chain. The new research report “Spinning around Workers’ Rights. International garment companies linked to forced labour in Tamil Nadu textile mills” by SOMO and Arisa presents a set of detailed recommendations aimed at industry and governments, to finally achieve lasting solutions for the problems described.