Other working conditions are also quite bad in factories producing for C&A, Coolcat, G-Star, McGregor, MEXX, Scotch & Soda, Suitsupply, The Sting and WE Fashion

The working conditions in factories in India that produce for Dutch clothing brands are downright bad. No garment worker earns a living wage. More than one third of the workers not even gets the official minimum wage. Mandatory overtime is often not paid, intimidation is widespread and women earn even less than men. Also, some factories do not take care of social insurances and medical expenses. That, and more, emerges from the study Doing Dutch – Research into the state of pay for workers in garment factories in India working for Dutch fashion brands published today by the Clean Clothes Campaign and the India Committee of the Netherlands.

Starvation wages
As many as 53 of the 150 workers interviewed earn less than the minimum wage and thus get paid less than required by the law. On average workers earn just €100 per month, after deduction of various fines often not more than €90. That is about one third of a living wage. According to the Asia Floor Wage a living wage for workers in India amounts to around €256. Most workers can not properly support their families with this wage. Food and housing, usually a one-room apartment without water tap, with a shared toilet outdoors, are the biggest expenses. Almost everyone would like to buy healthier and more varied food, but is unable to do that because of low wages. Almost everybody would like to buy healthier and more varied food but that is not possible because of the low wages.
These women are working very hard for a pittance. In the Netherlands we can support these women and girls and help them to stand up for themselves. Make clear via our petition [only in Dutch] that this exploitation should stop and ask for clean clothes when you go shopping,” said Tara Scally, spokeswoman of the Clean Clothes Campaign.

Unpaid overtime work and ‘wage penalties’
If workers have to work overtime, it is compulsory, in which the factory management is very lenient when it comes to the rules. Overtime is mostly described by factory managers as “catching up for lost time”, for workers not having met the unrealistic goals. Especially women are forced into this unpaid overtime, for men it is easier to refuse the extra hours. In addition, almost all the factories impose a disproportional penalty for being late.

Gender inequality
Eighty percent of the people working in the garment industry in the regions studied are women. This is because women are kept passive and therefore not easily revolt against the strict regime of sanctions applied by managers in order to increase the production. In addition to their work in the factory women have to run the household, on which they spend five hours daily. They have to get water and gas, do the shopping, prepare the meals, take care for the children, put the house in order and do the laundry. The average working day in the factory is 9 hours. In addition, there is a travelling time of half an hour to two hours. As a result, there is hardly any time for sleep and relaxation, causing many women to be overburdened. 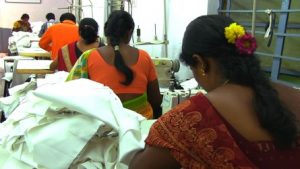 Mothers with babies are not allowed to work
Many factories have a nursery, but all factory nurseries refuse babies. Children are admitted between the age of two and four or five years. But only if the mother is working at the factory for a longer time and meets the production targets. Women who are pregnant are forced to resign because the factory management thinks they are too slow and have to pause too often. When the children get older, they may return, but in a lower function.

Researched factories representative for all garment factories in India
The factories produce garments for the Dutch brands C&A, Coolcat, G-Star, McGregor, MEXX, Scotch & Soda, Suitsupply, The Sting (Mills Brothers, Hallinger) and WE Fashion. The reason these brands have emerged, is a coincidence. Brands are not transparent about where their garments are made. So, to be able to deal with ten factories producing for Dutch brands, our researchers asked around at several factories until they found these ten factories. The results of the study are representative for the working conditions in India. All brands which manufacture clothes in India will have to deal with the problems described in the report.
“We expect garment companies to make a concrete plan for a living wage for all workers and that to make sure that their procurement price enables the suppliers to pay a living wage. The government must make firm agreements with all garment companies to ensure that this really happens and that production facilities are made public,” says Gerard Oonk, director of the India Committee of the Netherlands (ICN).

About the research
The Clean Clothes Campaign and the India Committee of the Netherlands have done research in factories in South India from August 2015. Local researchers interviewed 150 workers at ten factories producing clothes for Dutch brands, 15 workers per factory. They also talked extensively with members of trade unions and civil society organizations (NGOs) who are committed to working conditions and are fighting for the rights of the people who make our clothes.

About the Clean Clothes Campaign
The Clean Clothes Campaign network works to structurally improve working conditions and support the empowerment of manufacturing workers in the global garment industry. All clothing should be made under good working conditions in which workers have the freedom and ability to secure their own human rights.
The research is one of the activities of the campaign Women Power Fashion in cooperation with women’s fund Mama Cash. 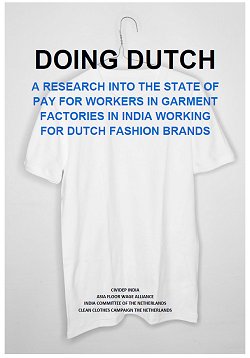 Reactions of the companies [partly in Dutch]

Petition [only in Dutch]