New research by the India Committee of Netherlands (ICN) shows that various forms of modern slavery, including child slavery, are found in more than 90% of the spinning mills in South India. These spinning mills produce yarn for India, Bangladeshi and Chinese garment factories that produce for the Western market.
The report Fabric of Slavery exposes the scale on which young girls and women – the majority of which are Dalits or ‘outcastes’ – are enslaved by employers who withhold their wages or lock them up in company-controlled hostels. They work long hours, face sexual harassment and do not even earn the minimum wage. Gerard Oonk, director of ICN: “We have raised the issue for five years now, but even to us the scale of this problem came as a shock.”

Researchers in South India have spoken to workers of 743 spinning mills in Tamil Nadu, almost half of all the mills in the region. The majority of the women working in those mills is between 14 and 18 years old; 10 to 20% is even younger than 14. Almost half of the researched mills have a so called ‘Sumangali Scheme’ where a significant part of worker’s wages is withheld until they have completed their contract.

60 hours a week
More than half of the researched mills do not allow workers to leave the hostel after working hours. In all those mills young women workers face intimidation, sexually coloured remarks and harassment, which they can hardly escape. Only 39 mills pay the legal minimum wage. In half of the spinning mills a standard working week means working 60 hours or more. Only 10 mills have trade union presence and no more than 33 mils have a workers committee where workers may be able to express grievances.

An 18-year-old former worker, who injured herself while escaping from a mill by climbing a 3,5 metres high wall says: “I was promised that I could continue my studies, but instead was forced to work for 12 hours in a shift. Supervisors torture girls to extract work beyond their capacity.”

In previous reports ICN has looked into spinning mills that supply Western brands such as C&A, Gap, Marks and Spencer, Primark and Walmart. In Fabric of Slavery ICN did not look at specific supply chains, but it is safe to say that yarn from the mills covered in this research is used in supply chains of international garment brands. 30% of the yarn is directly used in south Indian factories producing for export, and at least 20% of the yarn is exported to garment factories in China and Bangladesh. So, while the label in a T-Shirt does not say ‘Made in India’, the yarn might be.

Upscale successful initiatives
Advocacy and action on ‘Sumangali schemes’ by NGOs, unions and brands has contributed to reducing the incidence of such schemes, but has not tackled the issue of modern slavery in all its dimensions. Multiple factors contribute to this failing including: the poor enforcement of labour laws, the power of the industry, superficial audits by buying brands and lack of initiatives that increase joint leverage of brands. A few mills, often under pressure from their Western buyers, have addressed labour concerns in cooperation with local organisations. To sustain and upscale those successful initiatives, brands and governments from importing countries should use their collective leverage to tackle this structural form of slavery in co-operation with the central and state governments, the industry ánd local trade unions and NGOs. 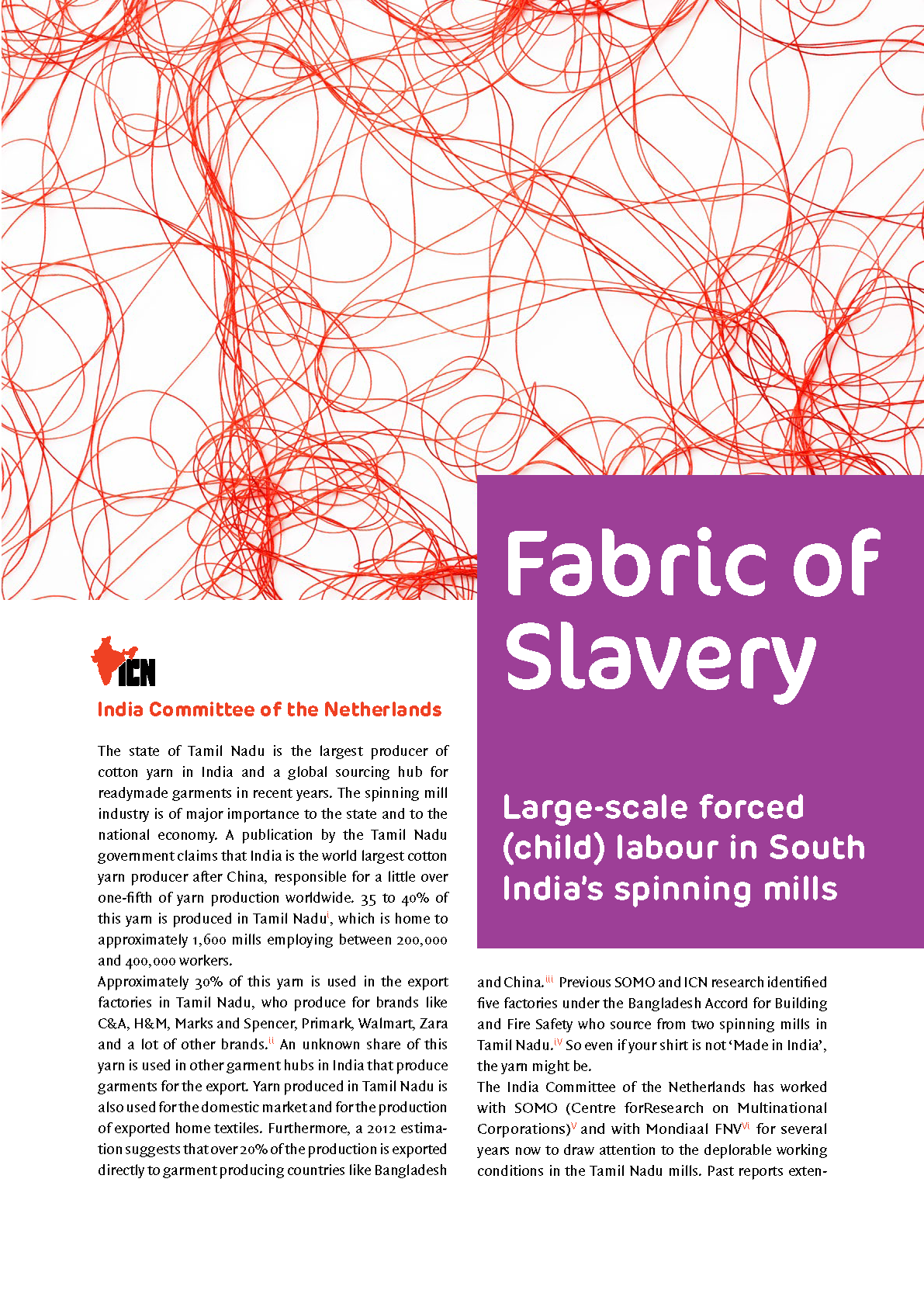