Despite some improvements, problems persist in the garment supply chain

Today, the Centre for Research on Multinational Corporations (SOMO) and the India Committee of the Netherlands (ICN) are presenting a sneak preview of their upcoming report on labour abuses in the South Indian garment industry. The two-pager preview is published on the occasion of a meeting of the Sumangali Bonded Labour group of the UK-based Ethical Trade Initiative (ETI). SOMO and ICN call upon garment brands to take their responsibility to ensure that workers’ rights are respected throughout their supply chain.

In May 2011 SOMO and ICN published the report Captured by Cotton – Exploited Dalit girls produce garments in India for European and US markets. The report uncovered troubling evidence that products for big garment brands and retailers are being made by girls from Dalit and low caste background under exploitative working conditions in Tamil Nadu, South India. In April 2012,
publication of a follow-up report by SOMO and ICN is scheduled. New field research has been conducted, including interviews with nearly 200 women workers. The new report examines the current situation at the four garment manufacturers originally investigated for Captured by Cotton. Following the first report, SOMO and ICN have looked at what the industry promised to undertake to curb labour abuses, what has actually been achieved, and to what effect.

Some improvements – but problems persist in the garment supply chain
Since the first report by SOMO and ICN, some improvements in employment conditions have been observed. Wages have increased, and so has the final amount that workers may receive at the end of their contract. Workers’ living quarters have improved somewhat. There have also been some improvements regarding freedom of movement. Permission to leave the factory compounds is granted more easily; sometimes groups of women are allowed to go out shopping unaccompanied. However, major problems still persist, including the recruitment and employment of women workers under bonded labour schemes, as well as other forms of unacceptable labour abuses. Employers recruit from among the poorest, most marginalised and least empowered communities. Women workers are still expected to work for long hours of forced overtime, sometimes for up to 24 hours a day, and frequently face physical and sexual abuse.

Role of companies
Some companies have taken steps to address the issues uncovered in SOMO and ICN’s first report. However, more needs to be done. For one thing, it is essential that these initiatives involve local civil society stakeholders. Also, such initiatives should be supportive of active labour unions, mature industrial relations between employers and unions, and a law-enforcing government. 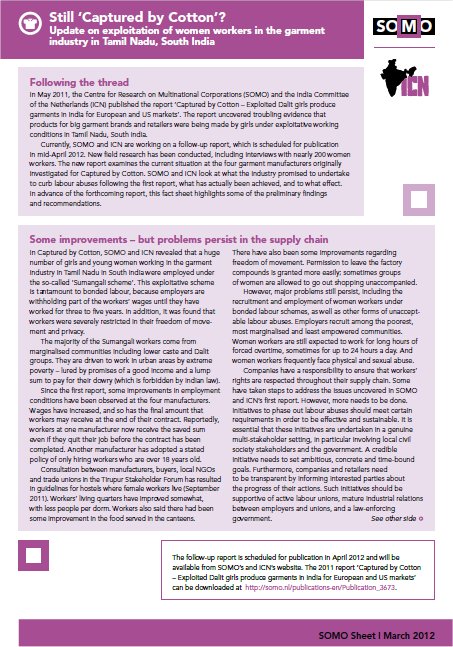